"Guess The Star": Delhi Capitals Share Video Of Batsman At The Nets. Watch

Delhi Capitals (DC) asked their followers to guess the batsman taking the peculiar stance in a training session video. 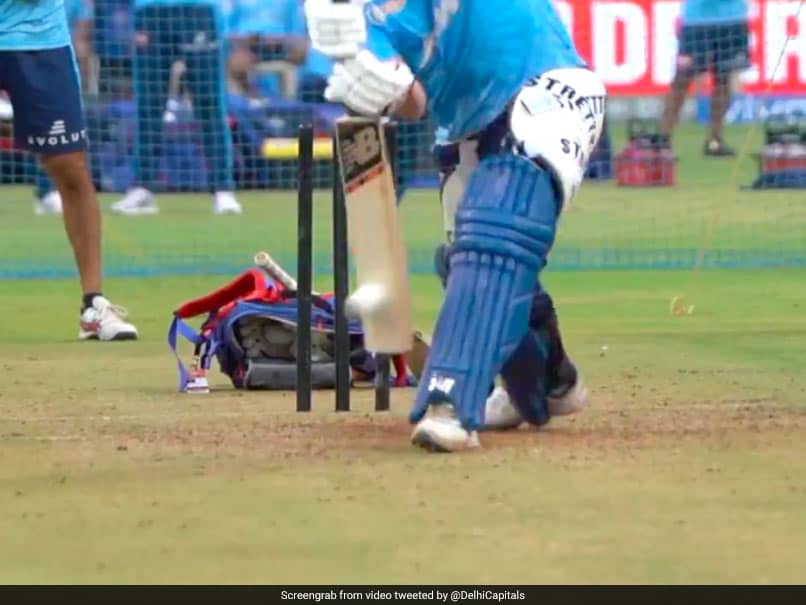 DC shared a training session video of a batsman having a pre-stance ritual.© Twitter/Delhi Capitals

Indian Premier League (IPL) franchise Delhi Capitals (DC) posted a video on their official Twitter handle of a batsman taking batting during their training session. DC's Twitter handle also shared with it a caption that asked their followers to guess who the "DC Star" at the crease taking strike in the video was. The caption said, "The hint is in the stance. Can you guess this DC star? #YehHaiNayiDilli." The batsman shows a peculiar ritual of touching both his pads and the thigh-guard before playing a shot through the covers.

The hint is in the stance

Reactions from fans hinted that the batsman in the video could be Steve Smith who has a peculiar pre-stance ritual before every ball he faces.

Smith was part of DC in IPL 2021, where he scored 104 runs in the six matches that were completed. The tournament was later postponed due to emergence of positive COVID-19 cases in the bio-bubble.

Smith was then named by Cricket Australia (CA) in the 23-man Australian squad for the limited-overs tour of the West Indies.

Aaron Finch was picked as the captain, while Mitchell Starc, Josh Hazlewood, David Warner and Pat Cummins were all named along with Smith in a strong looking squad.

Batsman Marnus Labuschagne missed out, due to "logistical complexities" of joining from the UK. In order to join the squad, he would have had to undergo two weeks of compulsory quarantine.

Tanveer Sanga, Adam Zampa, Mitch Swepson and Ashton Agar were the spinners to have made it to the squad.

The tour includes five T20 internationals and three ODIs scheduled to be played between July 9 to July 24.

Aaron Finch IPL 2021 Cricket
Get the latest updates on IPL 2021, IPL Points Table , IPL Schedule 2021 , live score . Like us on Facebook or follow us on Twitter for more sports updates. You can also download the NDTV Cricket app for Android or iOS.