IPL 2020, KKR vs DC: Varun Chakravarthy returned with the best bowling figures of IPL 2020, while Nitish Rana overcame a personal tragedy to smash a whirlwind 81 as KKR defeated Delhi Capitals by 59 runs. 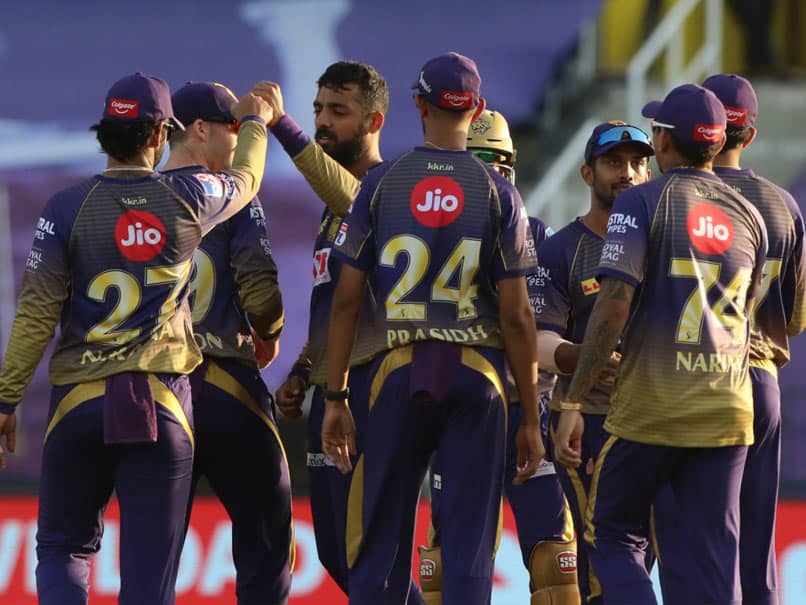 Leg-spinner Varun Chakravarthy dished out the best bowling performance of the IPL 2020 with a five-for after his batting colleagues stepped up in style as Kolkata Knight Riders beat Delhi Capitals by 59 runs in Abu Dhabi on Saturday. Promoted to open the innings, Nitish Rana revelled in his new role as he overcame a personal tragedy to smash a whirlwind 81 and shared a game-changing 115-run stand with Sunil Narine (64) to lift KKR to an imposing 194/6 after being put in to bat.

Cummins gave a perfect start, dismissing both the openers Ajinkya Rahane (0) and in-form Shikhar Dhawan (6) in his first two overs.

Then Chakravarthy played the finisher's act in the back-end of the innings to choke the DC run chase.

Coming on the back of a horror batting show against Royal Challengers Bangalore when they crumbled to 84/8, KKR ticked all the boxes to keep their playoff hopes alive by securing their sixth win, with three matches left.

For DC, this was their second successive loss but they still maintained the second spot. Skipper Sheryas Iyer was the top-scorer for DC with 47 as he, along with Rishabh Pant (27), held on after Cummins' twin strike. They took on the opposition attack in the second half but KKR's strategy to press in Chakravarthy paid dividends.

The spinner opened his account after Pant holed out at deep square leg and in his next over he got two in two, dismissing Shimron Hetmyer (10) and Iyer off consecutive balls.

Hetmyer fell while trying to clear the long on boundary, while Iyer could not connect well and was caught by Kamlesh Nagarkoti at long on.

In his next over, Chakravarthy dismissed Marcus Stoinis and then picked his five-for on the fifth ball, cleaning up Axar Patel with a straight one.

Earlier, Nitish Rana revelled in his new opening role with a whirlwind 81, while Sunil Narine, playing in her first match after being cleared of suspect bowling, smashed a 32-ball 64 to propel KKR to 194 for 6 after being asked to bat.

Promoted to open, Rana smashed 13 fours and one six in his 53-ball 81, while Narine also came out all guns blazing, smacking four sixes and six fours as KKR put behind their horror show against Royal Challengers Bangalore to post a stiff total. The left-handed duo stitched together 115 runs from just 56 balls to seize the momentum.

Having crumbled for 84 in their last match against RCB, KKR once again were staring down the barrel at 42/3 after 7.2 overs.

Anrich Nortje grabbed the wickets of the under-performing Shubman Gill (9) and Rahul Tripathi (13) inside the Powerplay, while Kagiso Rabada accounted for Dinesh Karthik (3).

Just when KKR's tale of batting miseries began to unfold, Rana came into do the rescue act, taking the attack to the experienced R Ashwin in an over that yielded 13 runs.

Rana first smacked Ashwin's tossed up delivery for a six and followed it up with a boundary.

In the next over, Narine joined in to continue KKR's run feast in the back-end of the innings in an incredible partnership.

DC brought back Nortje but there was no respite for them and Rana brought up his fifty with an outside edge.

He was then seen dedicating his half-century to his father-in-law, who died of cancer recently, by showing a jersey customised by KKR as a special tribute to him.

Sheikh Zayed Stadium, Abu Dhabi IPL 2020 Cricket Kolkata Knight Riders vs Delhi Capitals, Match 42
Get the latest updates on IPL 2020, check out the IPL Schedule for 2020 and Indian Premier League (IPL) Cricket live score . Like us on Facebook or follow us on Twitter for more sports updates. You can also download the NDTV Cricket app for Android or iOS.