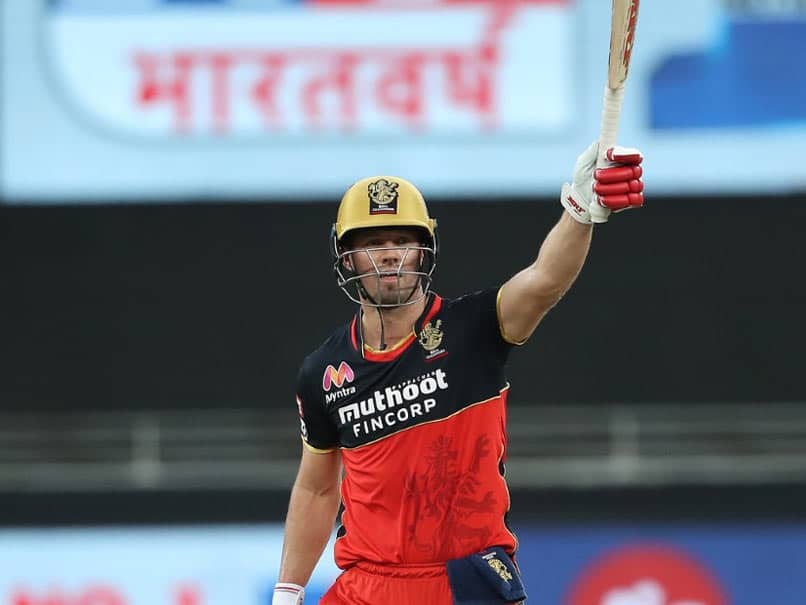 IPL 2020, RR vs RCB: AB de Villiers played the role of match-winner once again for his side© BCCI/IPL

Royal Challengers Bangalore (RCB) defeated Rajasthan Royals (RR) by seven wickets, in their Indian Premier League (IPL) 2020 match, at the Dubai International Stadium, in Dubai. With RCB looking set to crash to a defeat due to a slow start, AB de Villiers' arrival turned the tide in favour of Virat Kohli's team. The South African slammed an unbeaten 55-run knock off 22 deliveries, packed with six sixes and a four. After the match, skipper Kohli praised the T20 specialist, hailing his reading of the game. "It doesn't matter who the bowler is, he does what he does. AB is always been someone who's been ready to look at the situation and adapt his game accordingly. In my eyes he's the most impactful player in the IPL," stated Kohli.

"If he goes, the opposition know they have a slim chance and there's a good reason for that. It's purely because of the presence of someone like him that teams feel we are never out of the game," quipped the RCB captain.

Praising RCB, the Indian cricketer had some kind words for Gurkeerat Singh Mann. His partnership with De Villiers helped the 36-year-old slam the winning runs. Gurkeerat scored 19 from 17 balls and remained unbeaten.

RCB had a poor start to their chase, losing Aaron Finch early on. When asked if there could be some tweaks to the openers, Kohli said, "Our game pattern is very clear. Young Dev has batted beautifully, finchy has played some impact innings. We understand the dynamics and we're sticking to our plans."

Losing captain Steve Smith felt that his team couldn't deal with AB de Villiers, despite RR being in a winning position.

Defending the decision to hand the 19th over to Jaydev Unadkat and not Jofra Archer, the Australian cricketer said, "We wanted to use Jaydev to the bigger boundary, he bowls a lot of slower deliveries into the wicket".

After the win, RCB are third in the league table with 12 points and after nine matches. Meanwhile, RR are second last in the eight-team table with six points.

In the other match for Saturday, Chennai Super Kings (CSK) have won the toss and elected to bat against Delhi Capitals (DC) in Sharjah.

Steven Smith Rajasthan Royals vs Royal Challengers Bangalore, Match 33
Get the latest updates on IPL 2020, check out the IPL Schedule for 2020 and Indian Premier League (IPL) Cricket live score . Like us on Facebook or follow us on Twitter for more sports updates. You can also download the NDTV Cricket app for Android or iOS.