Sourav Ganguly is in the UAE to do the fine-tuning for IPL 2020, which gets underway from September 19. 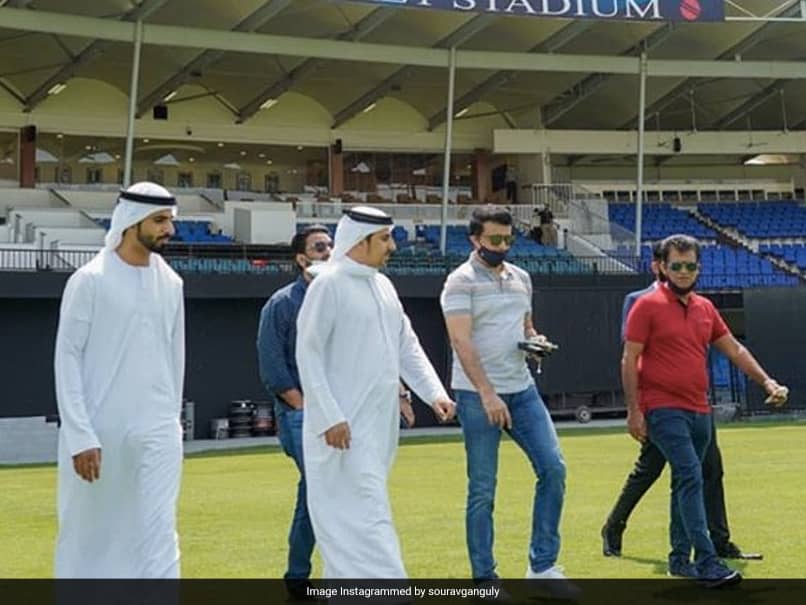 Sourav Ganguly visited Sharjah Stadium to review the preparations ahead of IPL 2020.© Instagram

The Board of Control for Cricket in India (BCCI) president Sourav Ganguly on Monday visited Sharjah Cricket Stadium -- one of the three venues for IPL 2020 -- to review the preparations, with only few days left in the start of the cash-rich tournament. The IPL 2020 was moved overseas to the United Arab Emirates (UAE) due to rising coronavirus cases in the country. Ganguly was accompanied by some of the local dignitaries and former IPL chairman Rajeev Shukla, among others. Satisfied with the arrangements made by the local authorities, the former India skipper shared a few pictures from his visit and wrote: "Famous Sharjah stadium all set to host IPL 2020".

Most of the players and support staff of all eight teams arrived in the UAE last month to start their pre-season after a long break due to the coronavirus pandemic.

The players have been training for almost a month now and are raring to go all guns blazing in the tournament and put a smile on fans' faces who have been waiting eagerly for the tournament to start.

Ganguly had left for the UAE last week to oversee the preparations ahead of IPL 2020 -- which will be played across three venues Dubai, Abu Dhabi and Sharjah between September 19 to November 10.

The opening match of the IPL 2020 will be played in Abu Dhabi between defending champions Mumbai Indians and last year's runners-up Chennai Super Kings.

The last league match of the IPL 2020 will be played in Sharjah between SunRisers Hyderabad and Mumbai Indians on November 3.

The BCCI is yet to announce the dates and venues for the play-off matches and the summit clash -- which will be played on November 10.

Comments
Topics mentioned in this article
Sourav Ganguly Sharjah Cricket Association Stadium, Sharjah IPL 2020 Cricket
Get the latest updates on India vs Australia Series, check out the India vs Australia Schedule for 2020-21 and Ind vs Aus live score . Like us on Facebook or follow us on Twitter for more sports updates. You can also download the NDTV Cricket app for Android or iOS.