Virat Kohli scored 94 not out to help India beat the West Indies by six wickets in the first T20 International in Hyderabad.

Virat Kohli led from the front and scored 94 not out to help India beat the West Indies by six wickets in the first T20 International in Hyderabad on Friday. Even though Virat Kohli missed out on his maiden T20I hundred, he garnered praise from both fans and cricket experts for showing tremendous grit in a tough chase. Among many, former England captain Kevin Pietersen heaped praise on the Indian captain, mentioning a particular flick shot as "holy smokes" on Virat Kohli's latest Instagram post.

"Good way to start the series. Lots of positives to take from today's win," Kohli said on Instagram along with a few pictures from the match.

Good way to start the series. Lots of positives to take from today's win. #INDvWI

Pietersen commented on Kohli's post, "Your flick this evening was quite something, bro! Holy smokes!" 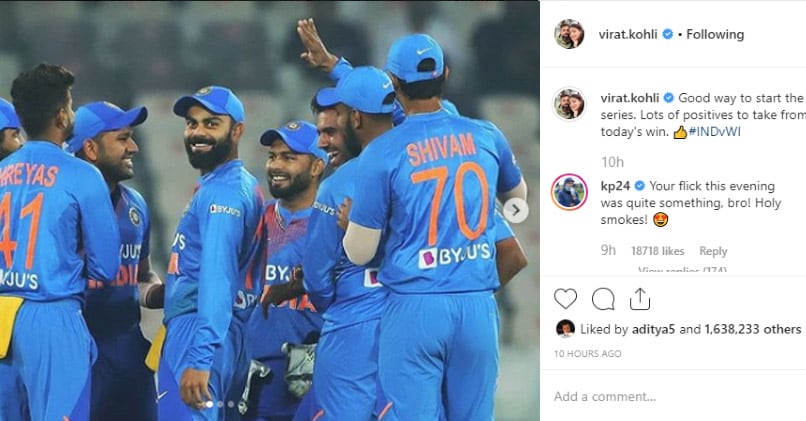 Kohli's 50-ball 94 was decorated by six boundaries and as many sixes and helped India take a 1-0 lead in the three-match T20I series against the West Indies.

"Whenever I play T20 cricket I am not someone who comes to the ground to hit the ball in the air to entertain the crowd. I focus on doing the job. Our strength as a team is to strike in the latter half of the innings," Kohli said after the match.

Besides Kohli, KL Rahul impressed at the top of the order scoring 62 runs off 40 balls, including five boundaries and four sixes.

Earlier, despite having won the toss, India couldn't stop the West Indies from scoring a formidable total of 207/5 in 20 overs.

However, the hosts chased down the tough target with eight balls to spare. The two team will next meet in the second T20I in Thiruvananthapuram on Sunday.

New Zealand vs India 3rd T20I: When And Where To Watch Live Telecast, Live Streaming