Virat Kohli does not take India's T20 International ranking too seriously and thinks focus should be on doing the basics well. 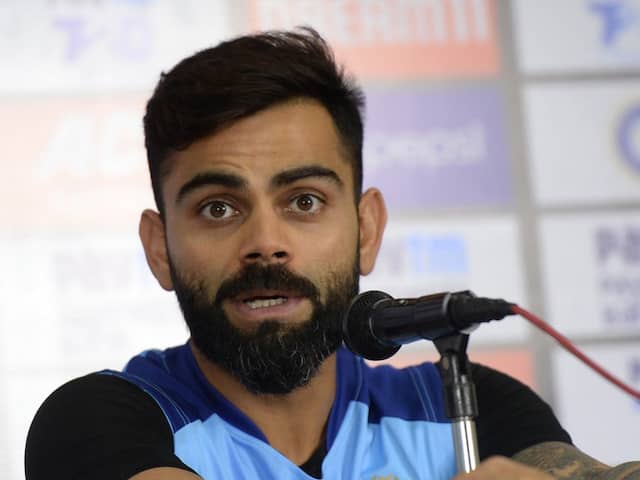 Virat Kohli said he's not looking too much into India's fifth place in T20I rankings.© AFP

India are the top-ranked team in Test cricket and second, only a few points behind England, in One-day Internationals (ODI) but despite their success in the two traditional formats, in T20Is, the Asian giants languish in fifth place. With the T20 World Cup set to begin next year, many eyes are on the shortest format of the game, including those of India skipper Virat Kohli. Ahead of the three-match T20I series against the West Indies, beginning on Friday, the Indian captain dismissed India's lowly standing in the T20I rankings, saying that the team is yet to field its strongest eleven in the shortest format.

"We need to focus on batting first and defending low totals as well. Those are two things that we need to really focus on. T20 is a format where you can experiment a lot more than ODIs and Tests," Kohli said ahead of the first T20I against the West Indies.

"You want to give chances to the youngsters in the shortest format, we have not played the strongest XI together in T20Is so rankings cannot be considered.

"We have the mindset that we will not focus on the rankings. Now heading into the T20 World Cup, we need to take our best team to the field, we would probably be playing our strongest XI going into the World Cup," he added.

The Indian skipper also made it clear there is only one place up for grabs in India's pace bowling attack for the T20 World Cup.

"The fight obviously is for one spot and I think more or less three guys have made a place for themselves. It's going to be a healthy competition and it will be interesting to see how it pans out," he said.

"It's not that big an issue for us. I think Bhuvi (Bhuvneshwar) and (Jasprit) Bumrah are experienced bowlers. They have been very consistent in T20 cricket. Deepak (Chahar) has come in and has bowled really well," he told reporters.

"(Mohammed) Shami is coming back and he is bowling really well. If he gets into a rhythm and specifically works on what's required in T20 cricket then he will be very, very useful in places like Australia, especially with his ability to pick wickets with the new ball. He has enough pace to execute yorkers," Kohli added.

Virat Kohli India vs West Indies 2019/20 Cricket
Get the latest Cricket news, check out the India cricket schedule, Cricket live score . Like us on Facebook or follow us on Twitter for more sports updates. You can also download the NDTV Cricket app for Android or iOS.