Rohit Sharma was engaged in a conversation with his daughter after scoring his 19th T20I half-century. 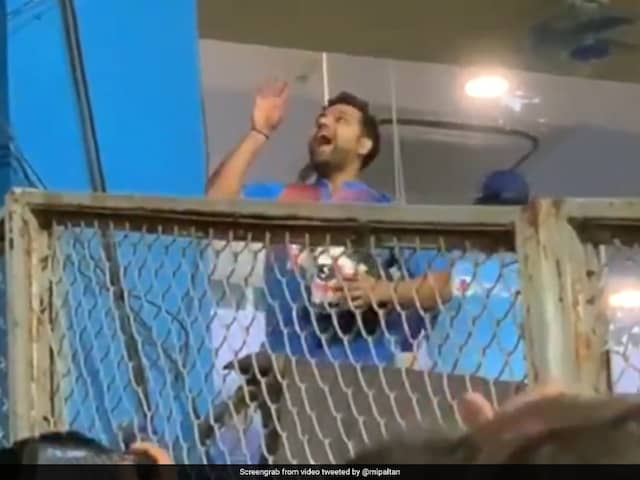 Rohit Sharma waved at his daughter Samaira after a quickfire knock of 70.© Twitter

India defeated the West Indies by 67 runs in the final in Mumbai to clinch the three-match Twenty20 International series on Wednesday. After being put into bat by the West Indies, India's opening pair of Rohit Sharma and KL Rahul gave the hosts a flying start and put on a 135-run stand for the first wicket. Rohit Sharma scored 71 runs while KL Rahul missed his third T20I century by nine runs. After his explosive knock of 71 off 34 deliveries, Rohit Sharma was seen engaged in a conversation with his daughter. Mumbai Indians' official Twitter handle posted a video where Rohit can be seen making adorable gestures towards his daughter.

Guess who is Rohit talking to in the stands?

Soon after the video was posted, fans flooded Mumbai Indians' post with replies.

In the match, India posted a mammoth first innings total of 240 on the board in the series decider.

In reply, the West Indies had a poor start as they lost three wickets inside the first four overs with just 17 runs on the board.

Kieron Pollard scored a quickfire 68 off 39 balls but the visitors eventually fell short by 67 runs in the chase.

KL Rahul was adjudged player of the match for his knock of 91 in the third T20I. Virat Kohli, who remained unbeaten on 70, was named player of the series for scoring 183 runs in the three-match series.

With the win, India took the T20I series 2-1. The two teams will now lock horns in a three-match One-Day International (ODI) series.

The first ODI will be played in Chennai on Sunday. Vizag and Cuttack will host the second and third ODIs respectively.

KL Rahul India vs West Indies 2019/20 Cricket
Get the latest updates on IPL 2020, check out the IPL Schedule for 2020 and Indian Premier League (IPL) Cricket live score . Like us on Facebook or follow us on Twitter for more sports updates. You can also download the NDTV Cricket app for Android or iOS.