Mayank Agarwal brought up his second century of the series as India dominated the opening day of the second Test against South Africa in Pune. 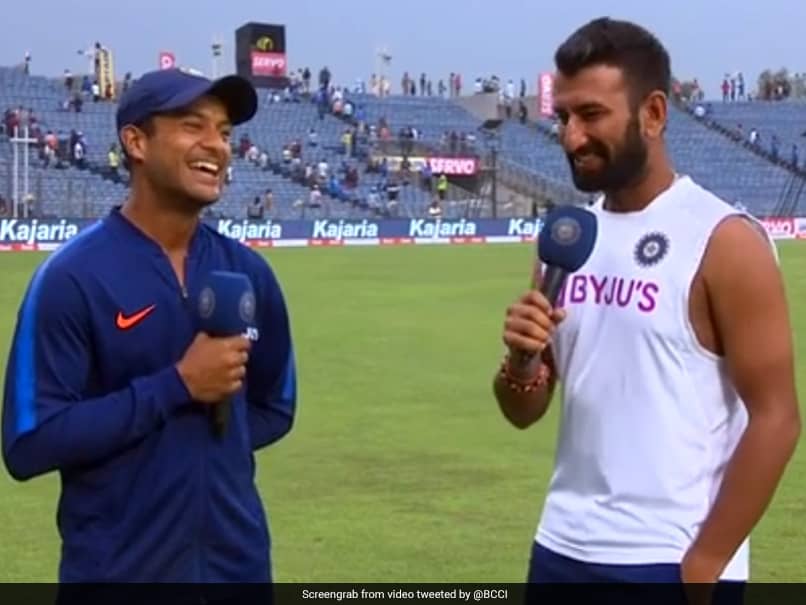 Cheteshwar Pujara caught up with Mayank Agarwal for a fun conversation.© Screenshot of the video tweeted by @BCCI

Mayank Agarwal continued his dream run, on Thusday, as he joined Virender Sehwag and Rohit Sharma on the list of Indian openers to score multiple centuries against South Africa. Agarwal, who scored a double-century in India's 203-run win in the opening Test, completed another hundred with a boundary off Vernon Philander to cement his place in the Test top order. Agarwal brought up his second century of the series as India dominated the opening day of the second Test against South Africa in Pune, ending at 273 for 3, with Virat Kohli not out on 63 and Ajinkya Rahane batting on 18.

After the close of play, Cheteshwar Pujara caught up with Agarwal for a fun conversation.

Pujara asked Mayank about what he had been eating for the past few days, Mayank said, "Simple, South Indian idlis - 2 of them with some coconut chutney and sambhar".

Of breakfast routines, transition from domestic to international cricket & taking Playstation lessons. @mayankcricket & @cheteshwar1 discuss it all. Interview by @RajalArora

Agarwal also underlined the importance of mental discipline after notching up his second ton in as many Tests.

"I'm very happy that I could get back-to-back hundreds, that's a good feeling," Mayank said after the match.

On his batting approach and the effort behind it, Mayank said, "Plenty of long-distance running, meditation and working on my game... It was always about mental discipline."

Agarwal and Pujara, who made 58 to bring up his 22nd Test fifty, stitched together a 138-run stand for the second wicket to steady the hosts' innings after Rohit Sharma's departure.