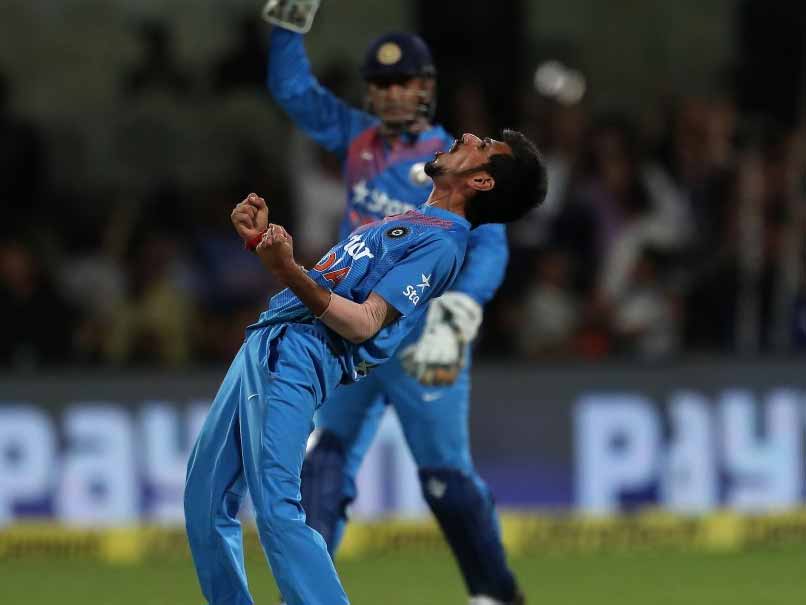 Leg-spinner Yuzvendra Chahal bagged six wickets to crush England and hand India a 75-run series-clinching win in the third and final T20I in Bangalore on Wednesday. Chahal registered his T20 best of 6-25 to help bowl out England for 127 in 16.3 overs. The visitors, chasing 203, lost eight wickets for eight runs in the space of 18 deliveries.

The 23-year-old Chahal became only the second bowler in T20 cricket to get six wickets in an innings after Sri Lanka's Ajantha Mendis achieved the feat twice with figures of 6-8 and 6-16.

The attacking spinner started England's batting rot in the 14th over of the innings, getting dangermen Joe Root (42) and skipper Eoin Morgan (40) on consecutive deliveries to derail the tourists' chase.

Root and Morgan had kept the chase alive with their 64-run third-wicket stand but the innings fell apart after their departure.

Chahal got three wickets in his fourth over to rip through the England middle and lower order -- five batsmen were out on zero -- as India won the series 2-1.

Chahal, who recieved the man of the match and series award for his eight scalps in three games, got great support from seamer Jasprit Bumrah's three wickets.

Earlier scintillating half-centuries from Suresh Raina and Mahendra Singh Dhoni helped India post a mammoth 202 for six after being put into bat.

India rode on the 55-run third-wicket partnership between Raina (63) and Dhoni (56) to thwart the England bowling attack after an early wicket fall.

The hosts lost skipper Virat Kohli for two after a terrible mix up with Lokesh Rahul (22) saw the star batsman being run out. Kohli was furious with Rahul for not responding to his call for a single.

Raina counter-attacked with two boundaries and five sixes during his 45-ball knock as he put on crucial partnerships with Rahul and Dhoni.

Rahul was bowled by Ben Stokes but the left-handed Raina carried on the power hitting as he recorded his fourth T20 fifty with a six off leg-spinner Adil Rashid.

Dhoni, who smacked five fours and two sixes in his 36-ball blitz, joined forces with Raina as the duo carted the England bowlers to all parts of the ground.

Raina fell in the 14th over while Dhoni, who put on 57 runs with veteran batsman Yuvraj Singh, stayed on until the second delivery of the final over.

A vintage Yuvraj turned on the heat with his 10-ball 27 as he hit seamer Chris Jordan for two fours and two sixes to give India 24 runs in the 18th over.

India, who won the Test (4-0) and ODI (2-1) series against England, now head into the one-off Test against Bangladesh starting next week in Hyderabad.

Comments
Topics mentioned in this article
India Cricket Team Cricket England Cricket Team India vs England 2016-17 Yuzvendra Chahal
Get the latest updates on India vs Australia Series, check out the India vs Australia Schedule for 2020-21 and Ind vs Aus live score . Like us on Facebook or follow us on Twitter for more sports updates. You can also download the NDTV Cricket app for Android or iOS.