India vs Bangladesh: Shivam Dube Tells Yuzvendra Chahal "Playing For The Country, A Proud Moment" Ahead Of 1st T20I

Yuzvendra Chahal interviewed Shreyas Iyer and Shivam Dube at the Arun Jaitley Stadium in Delhi where India will play Bangladesh in the first T20I. 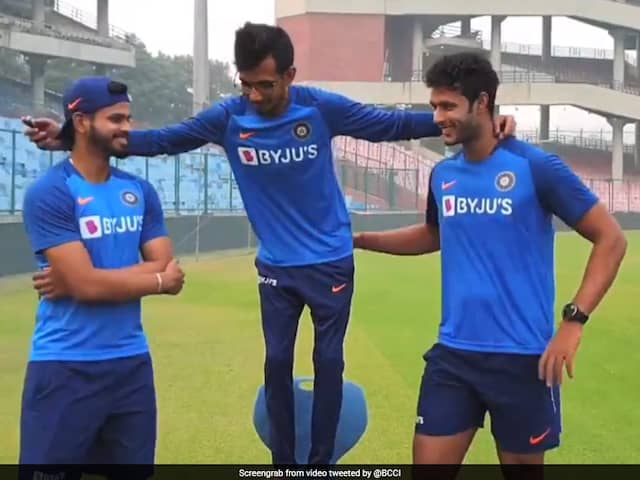 Yuzvendra Chahal is back in the Indian setup and that means that another episode of Chahal TV is out. This time, he interviewed Mumbai lads Shreyas Iyer and Shivam Dube while standing on a chair at the Arun Jaitley Stadium in New Delhi where India will play Bangladesh in the first T20I of the three-match series on Sunday. Chahal introduced his interviewees, who were both significantly taller than him, before glancing at the pair. He then pulled a chair from behind the camera and stood on it to make up for the height difference. "Now it is fine or else these two will make my back hurt," he said.

He asked Dube for his thoughts on the match, which would mark the 26-year-old's debut for the national team. "I just want to continue performing well. I am playing for the country now so it is a very proud moment. There will be more eyes on me and so I need to work hard and continue the good work," he said.

Shreyas then said that Dube hits the bigger sixes between the two. Chahal then asked Dube if his sixes are bigger than his own, which brought a laugh from the left-hander.

Dube had hit five consecutive sixes while playing for Mumbai in a Ranji Trophy match in 2018. It garnered attention from IPL franchises and he ended up being sold to Royal Challengers Bangalore for Rs 5 crore.

Chahal asked Shreyas, who captains Mumbai, what he had told Dube that the latter went on the assault in this manner.

"We told him before the day started that today your price will increase in the auction only if you hit six sixes in an over. So then he ended up scoring a hundred and hit five consecutive sixes in that innings. Tabi jaake usko paanch khokha mila (Only then did he end up getting Rs 5 crore)," said Shreyas as Dube laughed beside him. Chahal then said, "So if you had hit six sixes in six balls you would have got six crore?"

Yuzvendra Chahal India vs Bangladesh Cricket Shreyas Iyer
Get the latest Cricket news, check out the India cricket schedule, Cricket live score . Like us on Facebook or follow us on Twitter for more sports updates. You can also download the NDTV Cricket app for Android or iOS.