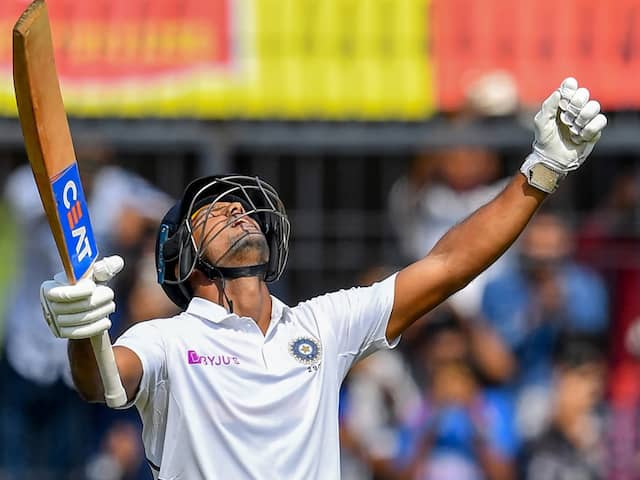 Mayank Agarwal smashed his second double century on Day 2 of the first Test against Bangladesh in Indore on Friday. Batting with great confidence, Agarwal converted his third Test century into a double hundred and with that he surpassed Don Bradman on the list of fastest to score two double Test centuries. Agarwal now has two double centuries and he took one inning less than the Australian batting great to achieve the feat. Bradman had taken 13 innings to score his second double century in Test cricket, while the Indian opener achieved this feat in just 12 innings. However, the record of taking the least innings to score two double hundreds is held by former India batsman Vinod Kambli who began his Test career on a electric-pace, scoring two double hundreds in his first five innings.

Agarwal completed his second double hundred in style with a maximum. His marathon innings came to an end after he had scored 243 runs -- his highest score in Test cricket. His knock was studded with a total of 36 boundaries, including eight hits over the fence.

Earlier on Day 1, Bangladesh missed a chance on the first day when Mayank Agarwal edged one to Imrul Kayes, stationed at first slip, who dropped the Indian opener on 32.

The 28-year-old opener made the visitors pay dearly for it by scoring his second double century in game's longest format.

Agarwal's double century ensured India finish Day 2 in a commanding position as he helped them score over 400 runs across three session and finish day's play at 493/6.