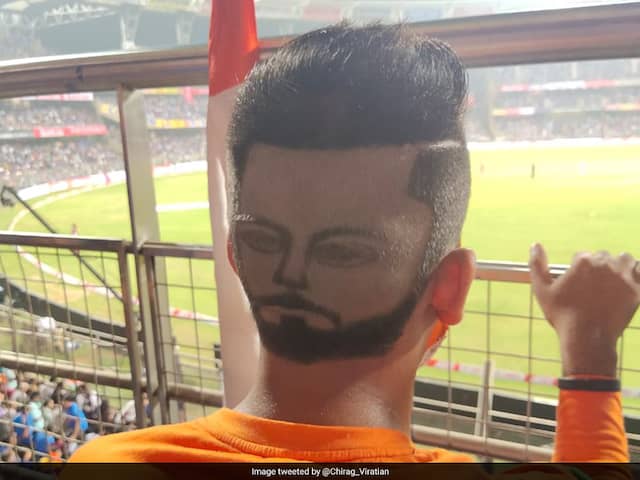 A Virat Kohli fan came to the Wankhede stadium with a unique hairstyle.© Twitter

Virat Kohli, who is one of the most followed sports personalities, has numerous fans across the world and the India captain is greeted by them both on and off the field. During the One-day International (ODI) series opener against Australia on Tuesday, one Virat Kohli fan, Chirag Khilare, stole the show with his unique haircut that resembled the India skipper's face on the back of his head. Chirag Khilare took to Twitter to post a picture of his unique haircut. "The best @imVkohli From heart to head #viratianchirag," Khilare captioned the post.

"For many years now, I have been following Virat in every match in India and have been a fan of him since he became the captain of the Under-19 team," Chirag Khilare was quoted as saying by ANI.

Khilare says it takes him about six to eight hours to get the hair tattoo done and he gets ready to watch every match in which Virat features in the same manner. He said that he had seen glimpses of captain Kohli many times but has not yet had a chance to meet him.

"My dream is to meet Kohli and when I will meet him, I will first touch his feet and hug him and capture that moment through a photograph," he added.

In the match, Australia captain Aaron Finch won the toss and invited India to bat in the series opener.

Rohit Sharma, who was rested for the Twenty20 International series against Sri Lanka, failed to provide a good start as he was dismissed by Pat Cummins for 10.

Shikhar Dhawan and KL Rahul stitched together a 121-run stand for the second wicket but once Ashton Agar dismissed KL Rahul, India kept losing wickets at regular intervals and were eventually bowled out for 255.

The hosts saw a dramatic collapse as they lost their last nine wickets for just 121 runs.

In reply, David Warner and Aaron Finch scored unbeaten centuries to help the visitors go 1-0 up in the three-match series.

The second ODI will be played in Rajkot on Friday.

Aaron Finch India vs Australia 2020 Cricket
Get the latest Cricket news, check out the India cricket schedule, Cricket live score . Like us on Facebook or follow us on Twitter for more sports updates. You can also download the NDTV Cricket app for Android or iOS.