Sourav Ganguly and Steve Waugh indulged in a long discussion as the proceedings in the first ODI between India and Australia unfolded in Mumbai. 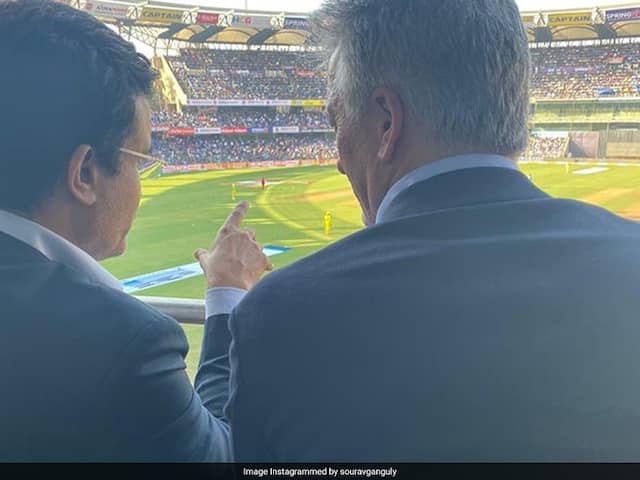 Sourav Ganguly and Steve Waugh, once fierce rivalries on the field, united during the first One-Day International (ODI) between India and Australia to send fans into nostalgia. The cricket legends were seen indulged in a long discussion while the proceedings in the Mumbai ODI unfolded. BCCI president Sourav Ganguly also posted a picture from the meeting on his Instagram account. He captioned the picture as, "Competed with this man for a long period .. tremendous respect". Veteran off-spinner Harbhajan Singh, who had played under the captaincy of Sourav Ganguly, liked the picture and commented "legends" on it.

Competed with this man for a long period .. tremendous respect

The 2000-01 and 2003-04 series between India and Australia will be etched in the minds of cricket fans for a longtime. The 2003-04 series was the swansong for Waugh as he bade adieu to international cricket at the Sydney Cricket Ground (SCG).

Ganguly is also remembered for frustrating Waugh during the 2000-01 series. It has been said often the ''Prince of Kolkata'' used to make Waugh wait for the toss before the start of every Test match.

Ganguly went on to make more than 7,000 runs in the longest format of the game, while Waugh registered 10,927 runs.

India, meanwhile, lost the Mumbai ODI by 10-wicket to Australia. They also conceded a 0-1 lead to the visitors in the three-match series.

India will host Australia in Rajkot for the second ODI while the final match will be played at Bengaluru on January 19.

Comments
Topics mentioned in this article
Steve Waugh Sourav Ganguly India vs Australia 2020 Cricket
Get the latest Cricket news, check out the India cricket schedule, Cricket live score . Like us on Facebook or follow us on Twitter for more sports updates. You can also download the NDTV Cricket app for Android or iOS.