World T20: India Should Have Avoided Bengaluru Helter-Skelter Versus Bangladesh

India beat Bangladesh by just one run to keep themselves in contention. They take on Australia on Sunday in what will be a knockout clash for a place in the ICC World T20 semifinals. 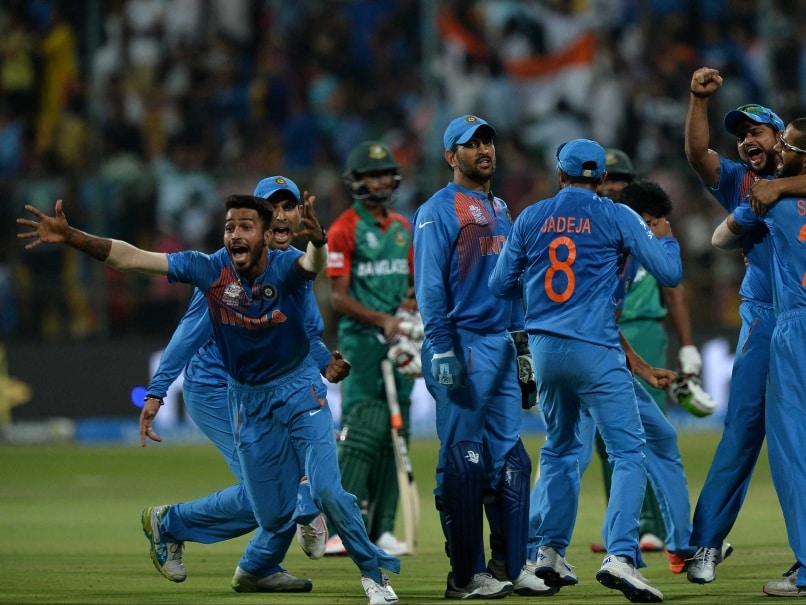 Hardik Pandya (left) celebrates with teammates after India edged out Bangladesh by just one run at Bengaluru.© AFP

When Bangladesh appeared cruising to victory at 100 for five, needing 47 runs from the last six overs of their ICC World T20 match in Bengaluru, a former colleague called to assure prophetically that India won't be losing the match. (Pandya Helps India Beat Bangladesh by One Run)

One thought it was a gambler's instinct, yet curious to know what was his deduction. His explanation was if India lose, the tournament, for all practical purposes, would end, taking a big financial hit!

Soon after the game he called back to say in a triumphant 'didn't-I-say-so' tone that he knew what's coming. His logic was startling: The tournament can't be ruined with India out of it so soon. He refused to believe that two most experienced Bangladesh batsmen at the crease, one of them a former captain, could not fathom that all they needed was to put the bat on ball and run two singles from the last three balls.

That's how most allegations about the veracity of a key match are made and then the evidence is gathered by depraved security agencies. Yes, it all sounds so simple.

See the the flip side of the argument. Both Mushfiqur Rahim and Mohammad Mahmudullah thought of finishing the game with a big hit since they needed two runs and they could not have asked anything but full tosses to smash. Both got the deliveries they would have liked to hit a winning stroke. Both connected, but found the fielders, who held their nerve, in the deep.

Still there was one ball and all Bangladesh needed was to run a single to force a Super Over. It's all so predictable for a non-striker to sprint down if the striker misses to connect the ball. Mahendra Singh Dhoni knows a thing or two about these things and he was ready after instructing young Hardik Pandya what not to do.

All Pandya needed to do was, in his captain Dhoni's words, bowl a back of length delivery outside the off stump to beat the bat. Pandya made sure he did not in his enthusiasm go too far wide to be called a wide.

Shuvagata Hom failed to connect the only ball he faced and the last man, 20-year-old Mustafizur Rahman, thought he could outrun wicketkeeper Dhoni like he does from his bowling run-up. The 34-year-old India captain won the race comfortably by quite a few inches to run Bangladesh out of the tournament.

Dhoni's 'Not So Cool' Avatar

Dhoni knew the circumstances under which the victory was achieved and expected everyone to appreciate it. He did not like a reporter bringing in the pre-match calculations of winning by a big margin to improve the net run rate and pointing to the narrow win.

Dhoni burst out, the way rarely one has seen him do, unless he found the reporter's tone so flippant or aggressive to hit back at him for a asking routine question. Come to think of it, Dhoni himself said that at some stage India will have to think of improving the run rate after that massive defeat against New Zealand in the opening game.

All that the reporter wanted to know was what happened to all the talk of India winning by a big margin and how would he rate the performance having barely managed to win the match.

Interrupting him from making a connected question, Dhoni curtly told a startled reporter: "One minute, I know you aren't happy that India won. Your tone and your question say that you aren't happy with this result, okay? As far as India winning this match is concerned, there is no script.

Dhoni expects reporters to analyse the importance of toss, the wicket on which his team had to bat and the reasons why they didn't make a lot of runs, before asking questions! He himself blasted his batsmen for the loss against New Zealand. Isn't he too harsh on the poor reporter?

Someone should have analysed India's fielding and catching without mentioning Dhoni's misses. Also, what does the captain think of the tweets by some of his teammates, particularly his favourite Ravichandran Ashwin.

How does one analyse seven batsmen, including the top six, looking good to play big shots getting into double figures before being dismissed. Here he defended the batsmen blaming it on toss and the conditions whereas he did not think highly of them when the ball was turning square at Nagpur against New Zealand.

Frankly, India should not have allowed Bangladesh even a sniff at their first T20 victory against them here.