Valtteri Bottas joined Mercedes in 2017 and has so far notched eight wins and 12 pole positions with the team. 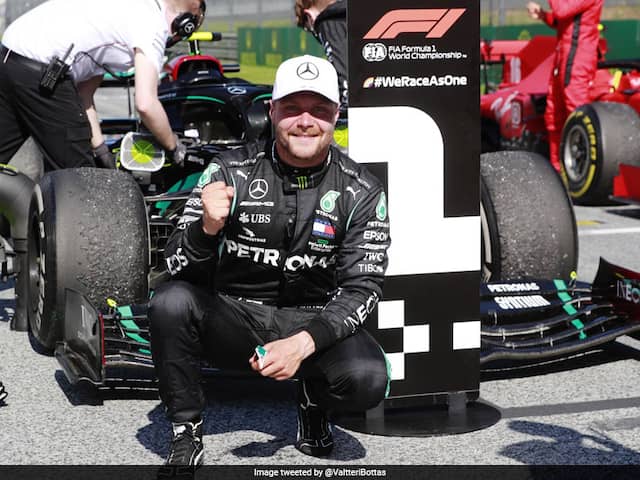 Next season will mark Valtteri Bottas' fifth campaign with the Silver Arrows.© Twitter@ValtteriBottas

Valtteri Bottas has signed a new deal with Mercedes, keeping him at the Formula One team until the end of the 2021 season. The Finnish driver heads into this weekend's 70th Anniversary Grand Prix at Silverstone 30 points adrift of team-mate Lewis Hamilton in the world championship. Next season will mark Bottas' fifth campaign with the Silver Arrows.

Hamilton's future beyond this year is yet to be confirmed but it is expected the six-time world champion will also stay with Mercedes.

Bottas, who was runner-up to Hamilton last year, joined Mercedes in 2017 and has so far notched eight wins and 12 pole positions with the team.

The 30-year-old, who won the opening round of the season in Austria, said: "I'm very happy to stay with Mercedes in 2021 and build on the success we've enjoyed together already."

"The past few years have been all about continuous improvement, working on every aspect of my performance," he added.

"I'm confident that today I'm the strongest I've ever been, but I can always raise the bar.... Ever since I fell in love with F1 as a kid it's been my dream to one day become world champion."

Mercedes chief Toto Wolff said: "We're seeing the strongest Valtteri we've ever seen this year -- in terms of his on-track performance, but also physically and mentally.

"I'm confident that we have the strongest driver pairing in F1 today and signing Valtteri is an important first step in retaining this strength for the future."