Ferrari have developed the fastest car but it is Mercedes and Lewis Hamilton who are heading for the titles again. 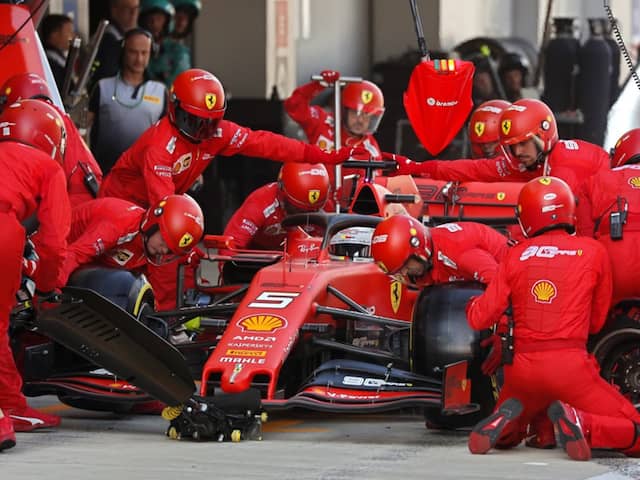 Ferrari team chief Mattia Binotto had every reason to read the riot act on Monday after the Italian team handed an unexpected triumph to Lewis Hamilton and Mercedes in Sunday's Russian Grand Prix. As he reviewed events at the Sochi Autodrom and scanned Italy's reaction to Ferrari's largely self-inflicted defeat, Binotto may also have felt a chronic driver headache coming on. Ferrari have developed the fastest car but it is Mercedes and Hamilton who are heading for the titles again.

The classic partnership of old master, in the form of four-time champion Sebastian Vettel, and young pretender, Charles Leclerc, has been heating up all season as Leclerc outperforms his venerable teammate.

On Sunday, it boiled over from a sporting duel into a more fierce and personal rivalry.

The dispute, or misunderstanding depending on your viewpoint, cost Ferrari a victory and a probable one-two and handed both prizes to their rivals as Hamilton came home ahead of Valtteri Bottas.

Vettel, who benefitted from a slipstream provided by Leclerc on the opening lap to take the lead, defied team orders by ignoring instructions to let the younger man go by -- arguing that he would be threatened by Hamilton if he did and adding that he had taken the initiative with his own speed.

Many critics on social media accused him of deceit.

"I stuck to the agreement," said Vettel, revitalised in Sochi after his first win in 13 months a week earlier in Singapore.

"I spoke with Charles before the race and it was all quite clear."

Leclerc, who criticised Ferrari for giving Vettel an 'under-cut' pit-stop in Singapore that enabled him to take control and victory, was circumspect in his criticism.

"There was no reason to take risks because we planned to swap back and that's why I didn't fight him," he explained, adding that he needed to discuss the incident in more detail with the team.

Leclerc had started from his fourth consecutive pole position and Ferrari knew he deserved better -- thus calling him in four laps earlier than the leader to have a tyres advantage.

It worked, but when Vettel suffered an engine failure, a Virtual Safety Car (VSC) intervention handed a free pit-stop and victory to Hamilton, leaving Leclerc to rescue a podium finish for Ferrari on a day when their reliability, strategy and team management failed.

Tuttosport described the mood as 'poisonous' and called on Binotto to 'finally set a clear strategy.'

Genial and softly-spoken, Binotto on Sunday evaded any confrontation on the division between his drivers.

"It went as we agreed and we thought it was right to ask Seb to swap," he explained.

With five rounds remaining, Ferrari will now switch attention to next season and have some tough decisions to make if they are to match Mercedes' metronomic qualities.

Hamilton, meanwhile, having registered his first win in four outings and the 82nd of his career, can focus on wrapping up his sixth drivers' title.

Sebastian Vettel
Get the latest updates on IPL 2020, check out the IPL Schedule for 2020 and Indian Premier League (IPL) Cricket live score . Like us on Facebook or follow us on Twitter for more sports updates. You can also download the NDTV Cricket app for Android or iOS.