Ferrari-bound Carlos Sainz was fifth for McLaren ahead of an out-of-sorts six-time champion Lewis Hamilton in Mercedes. 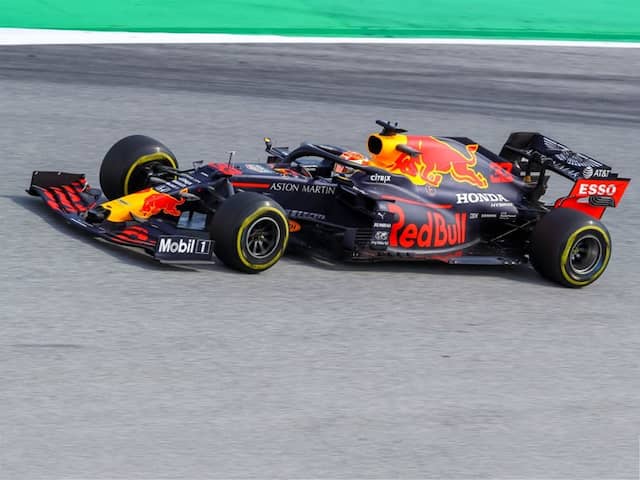 Max Verstappen clocked a best lap time in one minute and 3.660 seconds.© AFP

Max Verstappen grinned with satisfaction under his protective mask Friday after he topped the times for Red Bull ahead of Mercedes' Valtteri Bottas in second practice for this weekend's Styrian Grand Prix. The Dutchman clocked a best lap time in one minute and 3.660 seconds to outpace the Finn, who won last Sunday's season-opening Austrian Grand Prix on the same Red Bull Ring circuit, by 0.043 seconds.

Having won twice, in 2018 and 2019, on his team's home track, Verstappen looked to have recovered his best form after an electrical failure forced him to retire last weekend.

A third win in the Styrian Alps was back in focus for Sunday's race behind closed doors under F1's strict Covid-19 protocols.

"We had much better feelings than last Friday," said the Dutchman.

"We learned more about the car - we weren't so happy last week, that's why we tried to fix some things. So far, it's much better. The direction we took seems to be the right one.

"I don't know if we have the right package to win the race, we'll find that out on Sunday, but for sure today has been very positive compared to last week."

Behind the leading duo, Racing Point were third and fourth with Sergio Perez, who topped the times in morning practice, and Lance Stroll respectively, the pair proving pre-season suggestions that they have a package to make them competitive this season.

Ferrari-bound Carlos Sainz was fifth for McLaren ahead of an out-of-sorts six-time champion Lewis Hamilton in the second Mercedes.

He said the car felt 'fairly similar" to last weekend, despite a steep rise in temperatures, but could not explain his loss of pace.

"There's a lot of working going on in the background to figure out why.

"I was feeling good in practice one, the start of P2 felt pretty good. Then I just started to drop off, I don't know why.

"Others out there are obviously quick and Valtteri has got good pace. So hopefully tomorrow we can be in a better position."

Behind Hamilton, Alex Albon was seventh in the second Red Bull ahead of McLaren's Lando Norris, who picked up a three-place grid penalty for ignoring yellow flags in the morning, Charles Leclerc of Ferrari and Esteban Ocon of Renault.

Ocon's team-mate Daniel Ricciardo crashed heavily during the session when he lost control at Turn Nine and hit the barriers.

He limped away, but the rear of his car was wrecked.

If local weather forecasts prove to be correct on Saturday, and qualifying is washed out by torrential rain, Friday's second practice could be used as a grid-setting session - a prospect of little attraction to Hamilton or Ricciardo.

"If we had to start P6, that would suck, if we didn't get to qualify," said Hamilton.

"It's not great to be starting further back than last week so it'll definitely make it challenging.

"I'll try to do the dry dance, if there is a dry dance to make sure there's no frickin rain on Sunday."

His team chief Toto Wolff was clearly concerned that the team had struggled to find solutions to the problems on Hamilton's car.

"For us, today wasn't a full attack nor was it a half attack - we were at a level that we don't normally use in second practice. I think we are still a little in the dark.

Daniel Ricciardo Formula 1
Get the latest Cricket news, check out the India cricket schedule, Cricket live score . Like us on Facebook or follow us on Twitter for more sports updates. You can also download the NDTV Cricket app for Android or iOS.