A downhearted Sebastian Vettel maintained he still loves his job as a racing driver despite enduring another day of crushing humiliation. 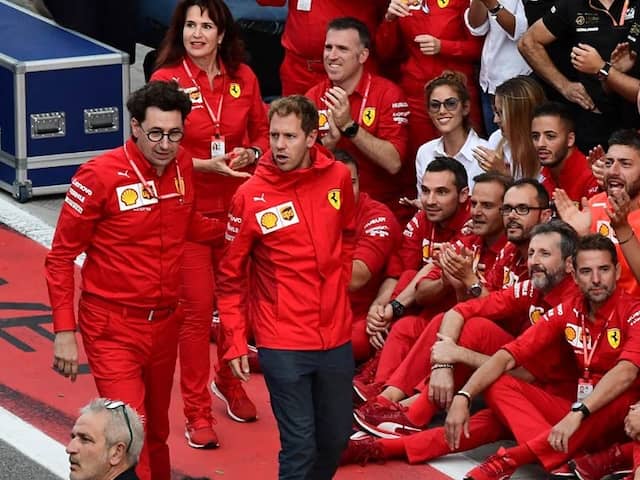 A downhearted Sebastian Vettel maintained he still loves his job as a racing driver despite enduring another day of crushing humiliation on his way to finishing 13th for Ferrari in Sunday's Italian Grand Prix. As his team-mate Charles Leclerc reeled off his and the team's second win of the season, the four-time champion produced an error-strewn race that ended with penalties that have left him within one more mistake of a ban. The 21-year-old Monegasque's second successive victory hoisted him above the 32-year-old German in the drivers' championship, an unforeseen position that helped explain his glum face and forced smile amid the team's post-race celebrations and official photo-shoots.

"I think we had a good start, I lost a position and then got I back and reconnected to the cars ahead, but then I lost the rear -- and I couldn't catch it.

"So it's as simple as that -- and after that the race was gone."

His spin at the Ascari chicane cost him his race and brought him a penalty for re-joining in a dangerous manner when he collided slightly with Lance Stroll's Racing Point.

"I struggled a couple of times to get the car going and to get it in the right direction as well, so I couldn't see him," Vettel explained.

Three points away from a ban

Asked if he was still enjoying his life as racing driver, he said: "I still love what I do, but surely, when you are not doing well, and when you know you can do well, then you can't be happy."

After the race, Vettel was also handed three penalty points on his Formula One driving licence for his move with Stoll, a blow that left him one serious incident from a ban.

He was given a 10-second stop-and-go penalty during the race.

He now has nine penalty points on his licence and drivers are given an automatic one-race ban if they reach 12 points during a 12-month period.

This leaves him facing the next three races knowing he is in danger of a ban if he commits another serious offence after incidents at last October's United States Grand Prix, the Canadian race in June and a clash with Max Verstappen at the British Grand Prix.

While Leclerc celebrated his rise to stardom in front of the tifosi, Vettel faced up to having been out-manoeuvred in qualifying, failing to shine in the team's home race for a second consecutive year and left in search of his first race win since last year's 2018 Belgian Grand Prix.