Sebastian Vettel endured a torrid and disappointing day, finishing 13th after spinning off and taking a penalty for rejoining in a dangerous fashion. 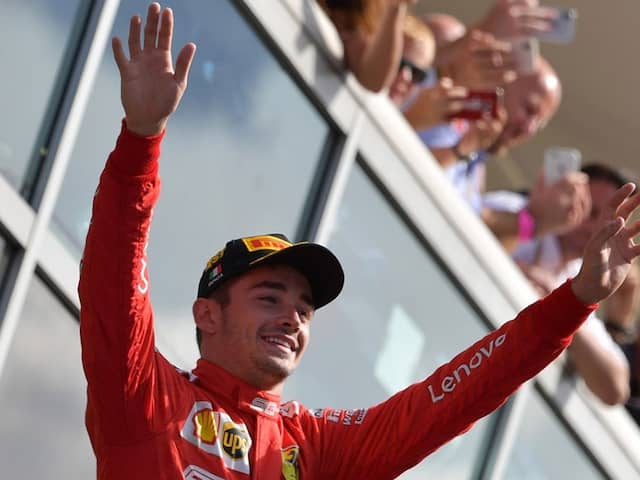 Charles Leclerc secured Ferrari's first victory at their home Italian Grand Prix since 2010 on Sunday when he resisted race-long pressure from both Mercedes rivals to claim his second successive Formula One triumph. The 21-year-old Monegasque, who dedicated his maiden win last Sunday to the memory of his late friend Anthoine Hubert, who was killed in an F2 race a day earlier, was exultant as a vast army of 'tifosi' in an estimated crowd of more than 150,000 celebrated deliriously.

"What a race!" said an exhausted Leclerc. "I have never felt so tired in a race. It was so difficult. For me, it is a dream to win here like this in front of the 'tifosi' - thanks to everyone!"

Lelcerc came home narrowly ahead of second-placed Valtteri Bottas and his Mercedes team-mate Lewis Hamilton, who pursued the victor for most of the race until his tyres let him down.

After a late pit stop, Hamilton then claimed the fastest lap of the race.

Leclerc's Ferrari team-mate Sebastian Vettel endured a torrid and disappointing day, finishing 13th after spinning off and taking a penalty for rejoining in a dangerous fashion.

Hamilton apologised to Mercedes and said his tyres "had gone off the cliff.... I'm sorry I wasn't able to pull it off," he said.

The defending five-time champion now leads his Mercedes team-mate Bottas by 63 points in the drivers' championship.

The air temperature was 20 degrees Celsius and the track 33 as the lights went out, Leclerc making a clean start and fending off Hamilton at the first chicane.

Verstappen was an opening lap casualty and required a pit stop for a new front wing and a set of hard tyres, after a collision at the first chicane.

After a wheel-banging battle between Albon and Sainz, Leclerc clocked a fastest lap and then Vettel spun at Ascari, clipping Lance Stroll's Racing Point as he re-joined.

Both cars were damaged, Vettel pitting for a new front wing.

Vettel was given a 10-seconds stop-and-go penalty and dropped to last.

By lap 19, Hamilton and Vettel had warned their tyres were gone, the Briton pitting immediately for 'mediums' as Mercedes went for the 'under-cut'.

He fell to fifth, but Leclerc hung on to pit a lap later for 'hards' and return fourth as the champion roared down the straight.

The two fought ferociously, Hamilton attempting to pass twice, the second attack ending with him escaping across the grass. "He didn't leave me a car's width," said Hamilton.

The stewards agreed and Leclerc was shown a black-and-white flag, warning him to behave.

"I need more power, man," exclaimed Hamilton after another foiled attack as Leclerc surged out of range again.

On lap 36, Leclerc kept his lead by scampering across the run-off at the first chicane.

"Some dangerous driving here," reported Hamilton as the stewards noted the incident and Bottas, remorselessly fast, closed to within three seconds in third.

His tyres worn, with 10 laps to go, Hamilton out-braked himself and ran into the first chicane escape road. Bottas passed for second and the hunt was on. "I've nothing left in these tyres," said Hamilton.

Bottas cut the lead to a second, but the ice-cool Monegasque tyro hung on, his harder rubber keeping him ahead, while Hamilton pitted with three laps to go to seek an additional point for fastest lap.

Lewis Hamilton Monza Italian Grand Prix
Get the latest Cricket news, check out the India cricket schedule, Cricket live score . Like us on Facebook or follow us on Twitter for more sports updates. You can also download the NDTV Cricket app for Android or iOS.