A fan was caught on camera during a football match and he was left wishing he wasn't there. 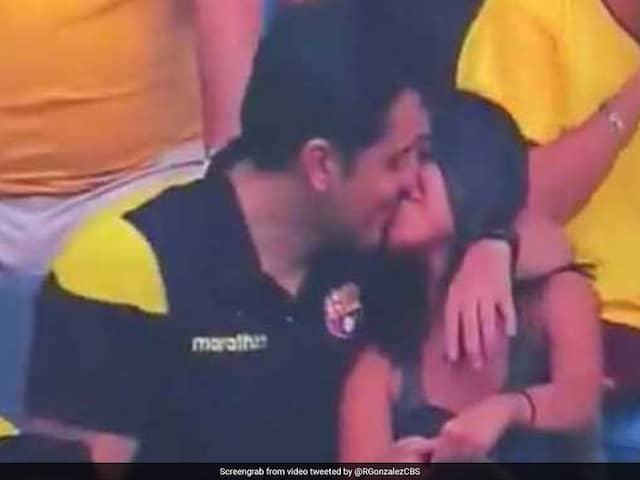 The fan's reaction after realising he was on the big screen has gone viral on social media.© Twitter

The 'Kiss Cam' has become a major rave in the US, especially during basketball matches in the NBA. Even former US president Barack Obama and the-then First Lady Michelle Obama were filmed on the 'Kiss Cam' during an interval in the match-up between the American Olympic team and Brazil's players. But not everyone is comfortable or happy when caught kissing on camera, especially when one is taken completely unawares. In one such instance, during a football match in Ecuador, a man was caught on camera kissing a girl next to him, but as soon as he realised that it was being beamed live on the big screen and televisions all around the world, he reacted awkwardly, distancing himself from the girl.

The video of the incident went viral on social media with many poking fun of the man's for his "guilty" reaction.

When you kiss your girlfriend, then realise you're on tv and your wife could be watching
pic.twitter.com/ifkvJGuwen

Fans on Twitter also came up with some hilarious memes.

What awaited for him when he got home that night... pic.twitter.com/hPhxP7U7Di

In the football match between Barcelona de Guayaquil and Delfín, the man is seen with his arm around a young lady sitting next to him and as the camera comes on them, he is seen giving her a kiss.

But as soon as he looks up, in all probability realising that they are on the big screen, the smile disappears from his face and that of the girl, he quickly takes his arm away and with a serious face starts looking around.