Serge Gnabry hit a hat-trick as holders Bayern Munich romped to a record 8-0 rout of Schalke on Friday in the opening game of the 2020/21 Bundesliga season. 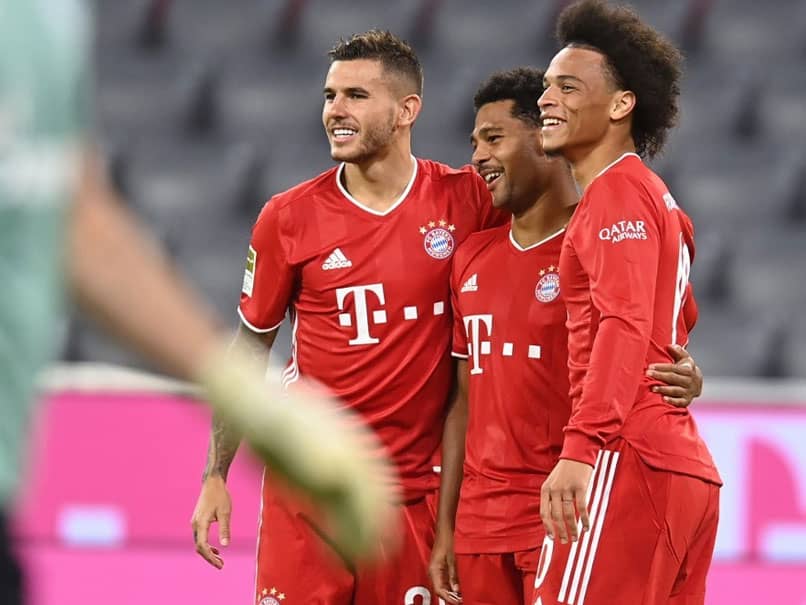 Bundesliga: Serge Gnabry (c) claimed a hat-trick in the goalfest at the Allianz Arena.© AFP

Leroy Sane said all-conquering Bayern Munich crave even more silverware after the Germany winger scored on his debut in Friday's historic 8-0 thrashing of Schalke in the opening game of the new Bundesliga season. "We're still hungry, even though we won the treble last season," said Sane after creating two goals for Serge Gnabry, who claimed a hat-trick in the goalfest at the Allianz Arena. "Winning our first game at home 8-0 is obviously super. "It felt really, really good finally to be able to play with the lads," said Sane, who spent most of last season sidelined at former club Manchester City after tearing knee ligaments at the very start of last season.

"It's been a very good day with lots of goals."

Just 26 days after winning the Champions League final, Bayern picked up where they left off last season with their 22nd-straight win.

"It is amazing how the team has built on the performance of the past season," said Bayern board member and former club captain Oliver Kahn.

The jaw-dropping result is the highest win in an opening game of a new Bundesliga season - five weeks to the day after Bayern's 8-2 thrashing of Barcelona in the quarter-finals of the Champions League.

Bayern had to brush off setbacks in the days leading up to kick-off.

On Thursday, the Mayor of Munich scuppered plans to allow 7,500 fans into the Allianz Arena, due to rising new cases of the coronavirus in the Bavarian capital, hours after Bayern confirmed the sale of Thiago Alcantara to Liverpool.

Before kick-off, David Alaba, who is stalling over signing a contract extension with a year left to go, dropped out with a leg injury.

However, Bayern picked up where they left off 26 days after winning the Champions League final in Lisbon.

Cash-strapped Schalke continued their miserable finish to last season as David Wagner's side have now gone 17 games without a win.

Gnabry opened the scoring with just four minutes gone with a great piece of finishing which gave Schalke goalkeeper Ralf Faehrmann no chance.

Burly central midfielder Goretzka grabbed the second against his former club when he hit the bottom corner from the edge of the box on 19 minutes.

Lewandowski, the Bundesliga's top scorer last season with 34 goals, opened his account for 2020/21 with half an hour gone.

He netted a penalty after being brought down in the area by Schalke defender Ozan Kabak, who has been linked to a move to Liverpool.

Incredibly, Lewandowski has now scored in each of his last 10 games against Schalke, dating back to April 2016, including a hat-trick in last August's 3-0 win over the Royal Blues in Gelsenkirchen.

It was 3-0 at half-time, but Gnabry grabbed his second two minutes after the break when he fired into an empty net after a sprint by Sane pulled Faehrmann out of position.

The pair combined again when Sane chested the ball down after getting in behind the defence and rolled the ball off to the waiting Gnabry to claim his hat-trick just before the hour mark.

Mueller added the sixth on 69 minutes after Lewandowski had again cut Schalke's defence to shreds.

The records were sent tumbling as Sane marked his debut with the seventh on 71 minutes when he sprinted onto Joshua Kimmich's superb pass and fired home with Lewandowski unmarked outside him.

Musiala, who only turned 17 in February, became the club's youngest scorer in the Bundesliga when he darted in from the left wing to add the eighth on 81 minutes.