A football referee accidentally deflected the ball into the back of the net and awarded the goal during a Dutch fourth-tier league match. 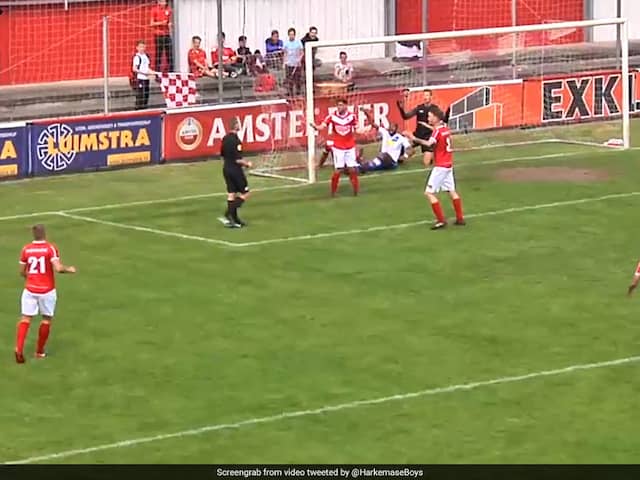 Football referee Maurice Paarhuis accidentally deflected the ball into the back of the net and awarded the goal during a Dutch fourth-tier league match on Saturday. Harkemase Boys, a Frisian amateur football club, expressed disbelief over the bizarre goal and tweeted the video of the incident, saying: "Never experienced this". In the video, referee Paarhuis is seen running into the penalty box as the Harkemase Boys' defenders seem to have cleared a ball from danger in the 66th minute of the match against southern visitors Hoek.

Hoek midfielder Rik Impens however takes another shot at goal from a tight angle, but the ball hits the front post before then glancing off the referee's shins and rolling across the goal line.

Seconds later Paarhuis allows the goal, to the great consternation of Harkemase Boys who immediately surround him to protest, to no avail.

"The referee was a so-called 'dead element' and could not but allow the goal," the Dutch daily tabloid Algemeen Dagblad reported, and described the effort to make it 3-2 to Harkemase Boys as "bizarre".

In any case, the goal turned out to have no impact on the full-time result as Harkemase Boys wrapped up their season with a 4-2 win against Hoek.

The Dutch 'Derde Divisie' is three leagues below the elite Eredivisie in the Netherlands, with Harkemase Boys lying sixth in the table, two places below Hoek with one round of the season to play.