PSG defeated Lyon 6-5 on penalties in the French League Cup final to claim another domestic treble. 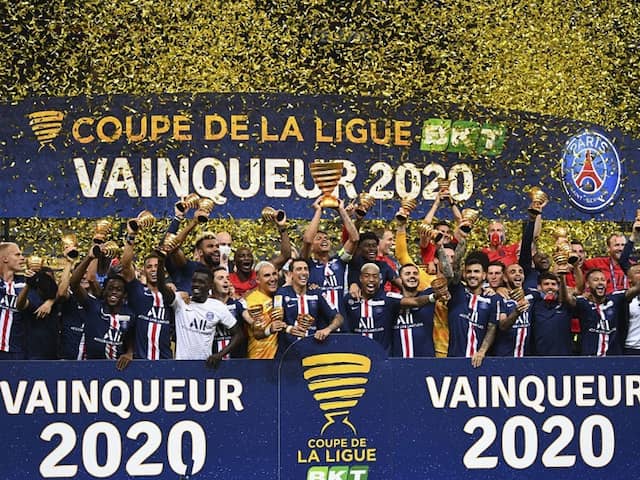 Pablo Sarabia scored the winning penalty in a shoot-out as Paris Saint-Germain warmed up for their assault on the Champions League in Lisbon by defeating Lyon in Friday's French League Cup final to claim another domestic treble. The Spaniard's successful kick came after Keylor Navas saved from Bertrand Traore and allowed PSG to win 6-5 on penalties after the game at the Stade de France finished 0-0 at the end of extra time. The victory comes a week after they beat Saint-Etienne 1-0 in the French Cup final, the first competitive match on French soil since the coronavirus shutdown.

They had previously been awarded the Ligue 1 title by virtue of being top when the season was ended in April with 10 rounds of matches unplayed because of the health crisis.

Before penalties, Thomas Tuchel's team had the better of a terse final on a sweaty night, but they badly missed the injured Kylian Mbappe.

The masked France superstar watched from the stands as Lyon kept PSG at bay for two hours before having Brazilian defender Rafael sent off for chopping down Angel Di Maria on the edge of the box late in extra time.

Mbappe was injured in last week's French Cup final, suffering a sprained ankle that looks likely to rule him out of the Champions League quarter-final against Atalanta in Lisbon on August 12.

PSG are desperate for tangible success in Europe but on this evidence they still have some rust to shake off before being ready for that test.

"We suffered but it's beautiful to win at the end. We will celebrate this and then tomorrow we will start to think about another big match," the excellent Marco Verratti told France 2 television.

This is the Qatar-owned club's fourth treble in the last six years, but the League Cup, an unloved competition, will be discontinued next season.

No European football for Lyon?

Covid-19 concerns did not prevent a crowd from attending this match -- postponed back in April -- but only 3,500 fans were allowed inside the 80,000-capacity venue.

It was the Parisian contingent who were celebrating at the end, as their team lifted the trophy for the ninth time in total, denying Lyon a first trophy since 2012.

Both of these teams must fear being at a disadvantage in the latter stages of the Champions League though after France opted against restarting its league season, unlike the other major European leagues.

As a consequence, the two cup finals are the only competitive match practice PSG will have managed in five months before facing Atalanta.

Meanwhile, this was Lyon's one and only competitive game since early March before they make a daunting trip to Turin to play Juventus in their Champions League last 16 second leg next Friday.

At least they have a 1-0 lead to defend, but they will still need to do better than they fared here.

Neymar looked sharper, fresh from scoring the winner in the French Cup final.

He had the first chance of the game when he drilled a first-time shot just wide from a Thiago Silva lay-off in the eighth minute, and he also saw a header tipped over by Lyon goalkeeper Anthony Lopes late in normal time before going on to coolly net in the shoot-out.

In between, Lopes also made a spectacular save to turn an Idrissa Gueye piledriver over late in the first half.

Verratti's performance in midfield was a major positive for Tuchel who along with Mbappe's injury also has major problems at full-back.

Here, left-back Layvin Kurzawa was needed on the right but hobbled off hurt midway through the second half.

Lyon, meanwhile, will now not be in Europe next season for the first time in 24 years, unless they win the Champions League.

PSG, Marseille and Rennes will be France's representatives in the 2020/21 Champions League, with Reims now joining Lille and Nice in the Europa League.

Paris SG Neymar Kylian Mbappe Football
Get the latest Cricket news, check out the India cricket schedule, Cricket live score . Like us on Facebook or follow us on Twitter for more sports updates. You can also download the NDTV Cricket app for Android or iOS.