Lionel Messi claimed a record 6th Ballon d'Or and his son's reaction was what made the occasion even more memorable. 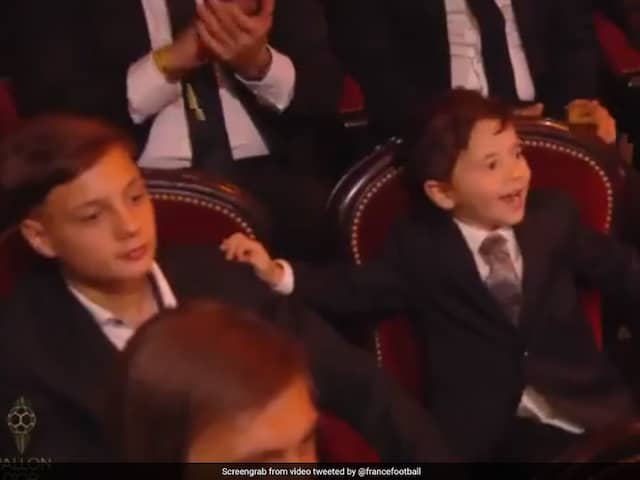 Mateo Messi couldn't control his excitement as Lionel Messi went on stage to pick up his award.© Twitter

As Lionel Messi received his sixth Ballon d'Or award on Monday night, his younger son Mateo's adorable reaction showed who his biggest fan really is. As the camera panned to Mateo after Messi was announced the winner of the prestigious award, the four-year-old is seen excitedly bouncing up and down on his seat, his face lit up with glee. He tugs at an older kid sitting next to him, who looks far less interested, but that does nothing to bring down Mateo's excitement.

When your dad became the 2019 Ballon d'Or ! #ballondor pic.twitter.com/E1WMm0fkCT

While Mateo has built up a reputation for trolling his father and brother - he celebrates Real Madrid goals at home to annoy Thiago and while playing football with Messi, he says he is Liverpool as they beat Barcelona - he proved that deep down, he was the happiest for his father.

Messi moved past Cristiano Ronaldo and he now has the greatest number of Ballon d'Or awards in history.

"It is 10 years since I won my first Ballon d'Or here in Paris and I remember coming here with my three brothers, I was 22 and it was all unthinkable for me what I was going through," Messi said on stage after receiving the award from last year's winner Luka Modric.

"I hope I have several years left to keep enjoying my football. I am aware of the age I have and these moments are all the more enjoyable because the moment when I have to retire is getting closer and that is difficult," the Argentine star added.

"All going well I'll have several years left but at the moment time seems to be flying and everything is happening very quickly. I hope to keep enjoying my football, my family, facing my rivals and all of this life that I have," Messi said.

Lionel Messi Football
Get the latest Cricket news, check out the India cricket schedule, Cricket live score . Like us on Facebook or follow us on Twitter for more sports updates. You can also download the NDTV Cricket app for Android or iOS.
Advertisement