Zinedine Zidane confirmed that Eden Hazard is feeling pain again in his troublesome right ankle and will miss Real Madrid's game away at Athletic Bilbao in La Liga on Sunday. 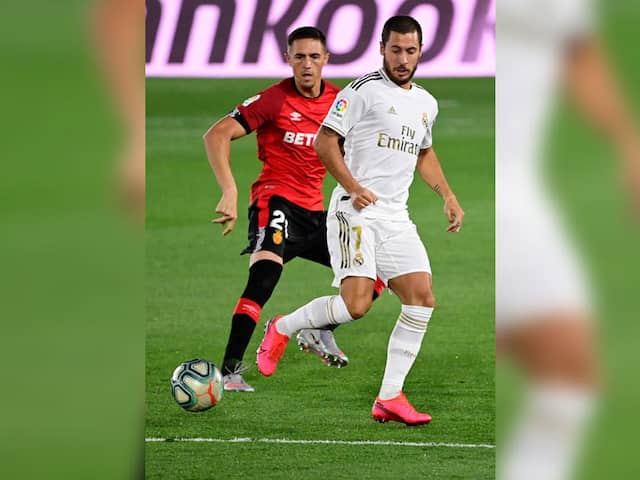 Zinedine Zidane hopes Eden Hazard will play again this season but has confirmed the Belgian is feeling pain again in his troublesome right ankle. Hazard will miss Real Madrid's game away at Athletic Bilbao in La Liga on Sunday, when Zidane's team could extend their four-point lead over Barcelona, who face in-form Villarreal. After undergoing surgery on his right ankle in March, Hazard was able to use the three-month suspension to recover.

Yet he was forced off early against Espanyol last weekend after taking a knock to the same ankle and then sat out Madrid's win over Getafe on Thursday.

"I hope so," Zidane said, when asked if Hazard will play again this season. "Eden has been having trouble these last few days. We don't want to risk anything.

"Hopefully it's minor, we hope we can see Eden with us before the end of the season. It's day-by-day, we know it was just a big hit, nothing more."

Asked if Hazard was becoming afraid of getting injured, Zidane said: "I don't think so, what you want is to be fine and to play. When he feels discomfort and isn't 100 percent, it's a problem for him and for everyone.

"We're here for him. It's Eden's first year here, he wants to help the team and when he can't do it, he's not happy."

Madrid are now firm favourites to win the title, having won six out of six games since the restart.

They will pull seven points clear if they win away at Bilbao on Sunday, which would put the pressure on Barca before they visit Villarreal a few hours later.

"The players know this is a long and difficult competition and after what they did during the lockdown, they have shown their desire to win everything," Zidane said.

"So there is no euphoria because we haven't won anything yet. It's just about work and commitment."

Madrid will be without Raphael Varane on Sunday after the defender hurt his neck during the win over Getafe.

"It's just a precaution, he's been a lot better but it's in his neck so we don't want to take any risks," said Zidane. "It also means he can have a rest which will do him good."

Real Madrid Eden Hazard Zinedine Zidane Football
Get the latest Cricket news, check out the India cricket schedule, Cricket live score . Like us on Facebook or follow us on Twitter for more sports updates. You can also download the NDTV Cricket app for Android or iOS.