Juventus are now four points clear of second-placed Inter Milan, who travel to Sassuolo on Sunday. 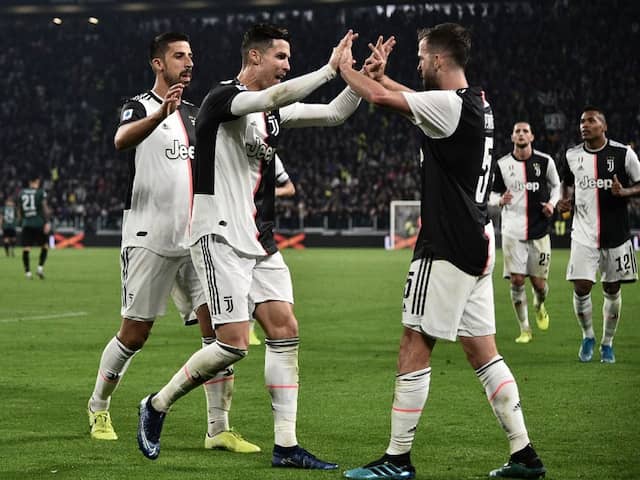 Cristiano Ronaldo and Miralem Pjanic sealed a 2-1 win for Juventus over Bologna to consolidate top spot in Serie A on Saturday. Cristiano Ronaldo was presented with a special jersey before kick-off to mark his 700th career goal scored playing for Portugal during the week. The 34-year-old hit his 701st after 19 minutes, with Pjanic adding a second eight minutes after the break following a blunder by Brazilian defender Danilo, who had earlier pulled Bologna level. The defending champions are now four points clear of second-placed Inter Milan, who travel to Sassuolo on Sunday.

Atalanta stay third after throwing away a three-goal lead to draw 3-3 with Lazio, with fourth-placed Napoli closing the gap to just one point after Arkadiusz Milik's double saw off Verona.

"The road is the right one, but we need to work on some details. It was a good match blighted by three or four errors," said Juventus coach Maurizio Sarri whose side host Lokomotiv Moscow in Champions League action on Tuesday.

Bologna coach Sinisa Mihajlovic returned to the bench in Turin after his second course of chemotherapy as he battles cancer.

And the visitors were given reason to hope of snatching a rare point against the Turin giants when Danilo responded to Ronaldo's opener with a 29th-minute volley.

But Pjanic sealed victory with his third goal in four games in the 54th minute amid chaos in front of the Bologna goal.

Bologna keeper Lukasz Skorupski denied Ronaldo and in-form Gonzalo Higuain late before both the crossbar and Gianluigi Buffon frustrated Federico Santander's push for a last-gasp equaliser for the visitors who slip to 12th place.

"We watched the Santander goal again, it was offside so VAR would have ruled it out," said Sarri.

"But I told the lads we mustn't sit back on a lead, we should attack, otherwise we leave ourselves in these risky situations to the very end."

Serie A leading scorer Ciro Immobile's late brace of penalties helped Lazio wipe out a three-goal deficit in a thrilling 3-3 draw with Atalanta.

Atalanta, who travel to Manchester City in the Champions League on Tuesday, had led 3-0 with 21 minutes to go at the Stadio Olimpico.

But Immobile scored from the spot on 69 minutes and less than 60 seconds later set up Joaquin Correa for the second, before capping the comeback two minutes into injury time with his ninth goal in eight league games this term.

"Immobile went for a walk, felt someone touch him slightly and dived.

"Even more, on the second penalty, Immobile put his foot in front of De Roon."

Colombian Luis Muriel scored a first-half double for the Bergamo side as compatriot and star striker Duvan Zapata was sidelined injured.

Alejandro Gomez got the third eight minutes before the break in a rematch of last season's Italian Cup final which the Romans won.

But the visitors lost momentum after the hour mark.

Immobile got one back from the spot after being brought down by Jose Luis Palomino and then combined with Correa for their second.

Immobile earned a late penalty after a Marten de Roon foul, celebrating wildly after converting to grab a dramatic point before Lazio's Europa League trip to Celtic next week.

"I'm losing years of my life kicking penalties in the 90th minute," said 29-year-old Immobile, after scoring his third league goal from the spot this season.

Polish striker Milik scored in either half as Napoli got back to winning ways at the Stadio San Paolo, after a goalless draw at Torino before the international break, before their Champions League trip to Salzburg.

"I started the season with fitness problems so I'm hungry now for goals," said Milik, who also scored as Poland qualified for Euro 2020 during the week.