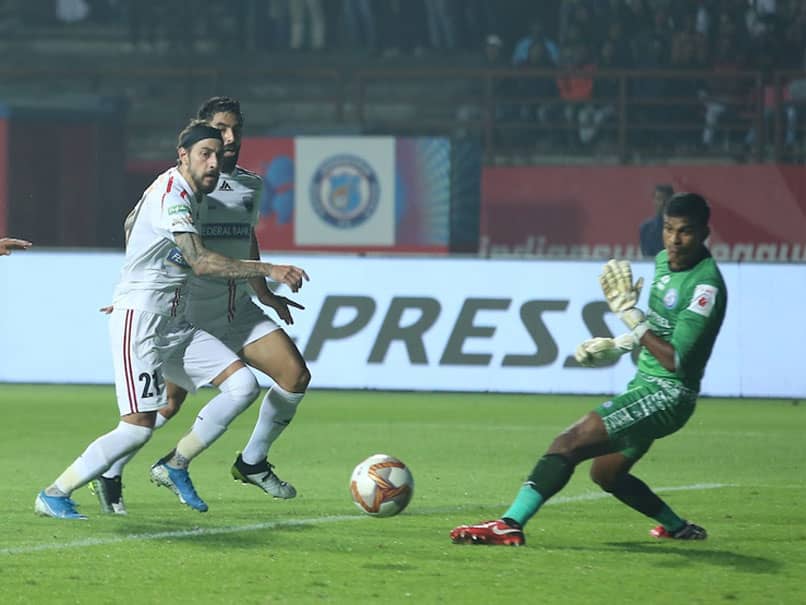 Sergio Castels fine form in front of the goal was not enough for Jamshedpur FC as NorthEast United fought back late for a thrilling 1-1 draw in an Indian Super League contest at the JRD Tata Sports Complex on Monday. The hosts were the dominant side and Spanish striker Sergio Castel's fifth goal of the season in the 28th minute seemed to have given all three points to Antonio Iriondo's men. But a 90th minute equaliser from Panagiotis Triadis ensured that NorthEast United's unbeaten record remained intact.

The result sees Jamshedpur second on the table, level on points (11) with ATK at the top, while NorthEast are now fourth with 10 points against their name.

Jamshedpur started on the front foot and looked dangerous going forward. Six minutes into the game, Noe Acosta dribbled to the byline on the left flank and chipped the ball to the centre of the box for Farukh Choudhary, whose acrobatic overhead kick flew just over the bar.

The NorthEast defence struggled to contain a clever Jamshedpur forward line, led by Castel. The Atletico Madrid loanee finished off a wonderful team move close to the half hour mark to give the home team the lead. Aitor Monroy's splendid pass into the box found Farukh who squared the ball to Castel. The striker chested it down before sending the ball into the net.

Minutes later, Memo Moura's drilled effort found an unmarked Castel in the box but this time the striker shot wide from close range, much to the relief of the visitors who struggled throughout the first 45 minutes.

In a bid to get back into the game, the visitors turned aggressive in their approach after the restart and gave away fouls in their own half. Jamshedpur enforced a free-kick routine from the training pitch in one such set-piece opportunity, but Narender Gehlot, who sneaked in behind the defence to get to Acosta's delivery, headed onto the roof of the net.

NorthEast showed signs of a comeback as the half wore on and Triadis and Asamoah Gyan saw more of the ball. The winger fed Gyan through on goal twice in quick succession, but the forward was unable to convert.

Gyan threatened again after the hour-mark, bearing down on goal after a quick counter-attack, but failed to skip past Memo who stuck out his leg to nick the ball off the striker before he could get a shot away.

But yet again, there was twist at the death as NorthEast came up with an equaliser against the run of play in the 90th minute. Gyan flicked a long ball into the path of Triadis who attacked the space left unattended by Gurung and Memo to flick a finish past Subrata Paul to ensure the Highlanders had a share of the spoils.

NorthEast United FC Football Indian Super League Panagiotis Triadis
Get the latest updates on IPL 2021, IPL Points Table , IPL Schedule 2021 , live score . Like us on Facebook or follow us on Twitter for more sports updates. You can also download the NDTV Cricket app for Android or iOS.
Advertisement