The German Football League had proposed allowing fans in stadiums when the next season gets underway in September. 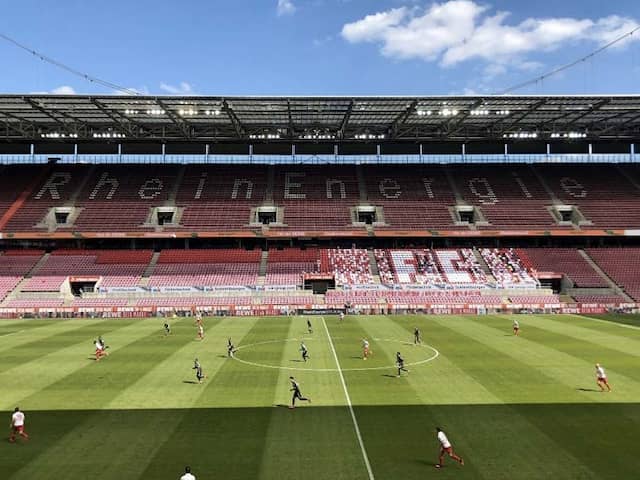 The final nine rounds of games of the 2019-20 season of the Bundesliga were played behind closed doors.© AFP

Germany's health minister Jens Spahn said Monday he opposes the Bundesliga's plans for the partial return of football fans to stadiums next season amid the coronavirus pandemic. "Thousands of spectators in the stadiums -- that is not suitable given the current infection rate," Spahn wrote on Twitter. "Now is not the time to take any avoidable risks." Last week, the clubs in Germany's top two leagues agreed to Bundesliga plans to allow the partial return of fans when the new league season begins on September 18.

The plans included clubs selling personalised tickets which could be traced, access only to seated areas of the ground, no alcohol sales at games until October and a ban on away fans until 2021.

However, the proposal by the German Football League (DFL) first needs approval by the government, and Spahn's comments dashed those hopes.

"The DFL concept is good in theory. However, in the pandemic, what is decisive is the practice in everyday life," Spahn added.

"We feel that we must remain vigilant."

"In the current situation, spectators in the stands would send the wrong signal."

However, the number of coronavirus infections is rising slightly in Germany with 436 new cases in the last 24 hours. Around 9,000 virus-related deaths have been recorded in the country.

"I cannot imagine it and I am extremely sceptical about it," he said of the DFL's plans, worrying that seeing football fans back in stadiums would send a "devastating signal" to German society.

Earlier in the day, Dilek Kalayci, chairman of the conference of Germany's health ministers which met Monday, indicated the plan was unlikely to be approved.

"We do not intend to pass a resolution on the DFL's hygiene concept," Kalayci told newspaper Berliner Morgenpost before the conference.

"Professional football is not at the top of the health ministers' priority list."

The final nine rounds of league matches last season were all played behind closed doors.

Fritz Keller, the president of the German FA, had raised the prospect of mass testing of spectators next season, but Kalayci torpedoed the idea.

"The idea that, among other things, all fans in stadiums could be tested is viewed critically by the majority of ministers," Kalayci said.

"Especially because before and after the game, no one can exclude and control large crowds of people and alcohol consumption.

"We currently need the testing capacity in many other areas - for example, schools, daycare centres, nursing homes, hospitals and people returning from travel."

Meanwhile, the Marburger Bund, the association and trade union for doctors in Germany, also warned against a return of fans to the stadiums.

"The danger of a mass infection would be real," chairperson Susanne Johna told the Neue Osnabruecker Zeitung newspaper.

"If we are unlucky, a 'super-spreader' would sit among the fans and the virus will spread like wildfire."

"Someone may not have any symptoms at all yet, but still his throat is already full of the virus.

"And with the shouting and cheering (at a game), it (further infections) can happen in a flash."

Johna says she has sympathy for the league's attempts to bring spectators back, "but the fact that their concept would prevent infections is unrealistic, in my opinion."

She doubts fans can be expected to keep their distance during matches, because when a goal is scored, "you hug each other and don't think of corona".