Watch: Player Scores Off An Unbelievable Header From Inside His Own Half

The video which is doing rounds on the internet is from a match between FC United of Manchester and Basford United FC in Northern Premier League Premier Division. 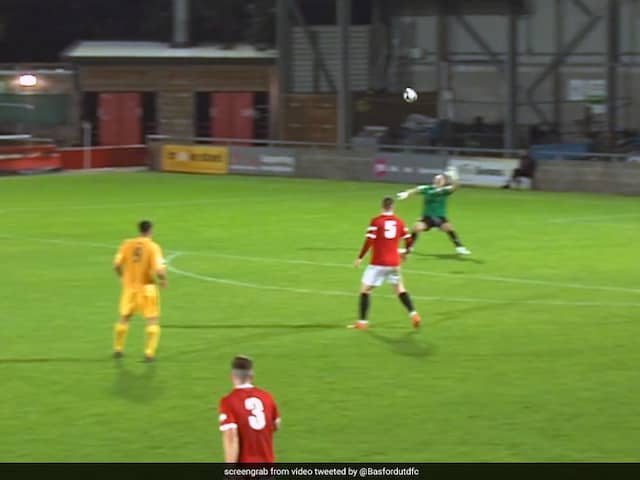 Basford United FC's Stef Galinski scored via a header from inside of his own half.© Twitter

There are some things in football which are not humanly possible. But this is not what the players think. Every now and then, football players produce something magical on the field -- scoring from their own half is one such thing, which forces one to wonder is there anything impossible for them. Recently, a video went viral online which gave a new definition to their limitations. The viral video which has everyone in shock features a player named Stef Galinski's who plays for Basford United FC and scored via a header from inside of his own half.

For everyone who wanted proof that it happened, here is Stef Galinski's headed goal from inside his own half.

The video which is doing rounds on the internet is from a match between FC United of Manchester and Basford United FC at Broadhurst Park in the Northern Premier League Premier Division -- the seventh tier of the English football league system.

Basford United FC playing away from home conceded the first goal with just eight minutes in to the match. Richards brought the visitors back in the game through a point-blank header in the 27th minute.

Both the teams entered the half-time on level terms at 1-1. After the play resumed in the second half, Basford United FC cashed on to a goalkeeping howler to take the lead for the first time in the game.

The second goal came after a FC United of Manchester player crossed the ball straight to Galinski who fired in a header from his own half, noticing that the opposition goalkeeper was well off his line.

Galinski's incredible goal boosted the morale of the visiting players and they started playing like a completely transformed unit.

They went onto to score one more goal in the added time and held their shape in the dying minutes to clinch the match 3-1.