Real Madrid struggled without Cristiano Ronaldo last season and Eden Hazard will be tasked with helping to fill the void. 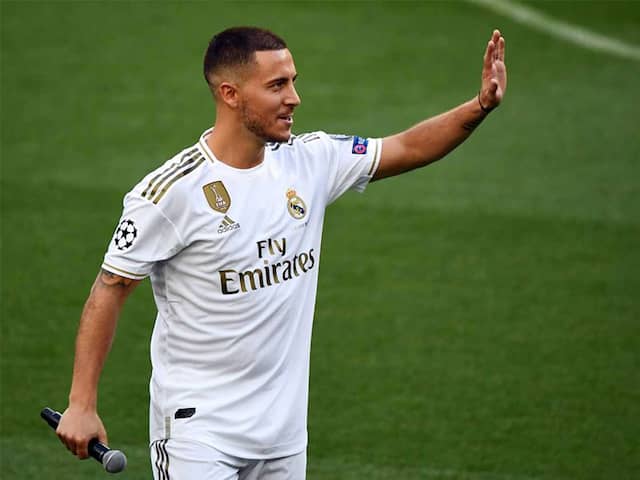 Eden Hazard was unveiled in front of around 50,000 fans at the Santiagio Bernabeu.© AFP

Eden Hazard said on Thursday he wants to become a "Galactico" at Real Madrid and believes he is joining the club at the perfect moment in his career. Hazard was unveiled in front of around 50,000 fans at the Santiagio Bernabeu after the Belgian's long-awaited move from Chelsea was confirmed last week. "I'm not a galactico, not yet, but I hope I will be one day," Hazard said in a press conference afterwards. "Despite everything I've done in the past, it will be like starting again from zero. I'm not a galactico, I'm Eden Hazard, just a very good player."

Madrid will pay Chelsea an initial 100 million euros for Hazard, with another 45 million due in potential add-ons for the 28-year-old, who has signed a five-year contract with his new club.

Hazard admitted Madrid made a move for him after the World Cup last year but insisted this was the right time to leave Chelsea.

"I have had various phases of my career, at Lille and Chelsea, and now I felt the time was right to join the best club in the world."

Madrid struggled without Cristiano Ronaldo last season and Hazard will be tasked with helping to fill the void.

Despite the arrivals of Eder Militao, Luka Jovic and Ferland Mendy this summer, he is the first statement signing since Zinedine Zidane was reappointed in March.

"When you play for a team like Real Madrid there is not one single star, the team is the star," Hazard said.

"I have been at Chelsea for seven years, but now I am the new guy in the team and I will try to contribute as much as possible."

Asked if he wanted to become the best player in the world at Real Madrid, Hazard said: "I will try but first I will try to be in the best team in the world.

"It is a different level. I had a lot of success with Chelsea and I want to win a lot with Madrid as well. Just to be here is a new challenge."

Hazard admitted Zidane was also a key factor in his decision.

"Everyone knows Zidane was my idol growing up," he said. "That he is the coach has been an important factor but not the only one. I already wanted to play here.

"I was a kid playing football in the garden with my brothers when I began to be a Real Madrid fan.

"Then I went to France, then to England, but being a Real Madrid player, wearing this shirt, it is an honour. I can't wait for the season to start."

The shirt Hazard wore in front of the fans came without a number and he admitted he had told Mateo Kovacic at Chelsea to ask his fellow Croatian, Luka Modric, about the number 10.

"I have been able to talk to Modric through Kovacic and I was joking when I asked him to lend me the number 10," Hazard said. "He said no, so I'll have to find another number."

Hazard scored 110 goals in seven seasons at Chelsea and was named in the PFA Premier League team of the year four times.

At the end of the 2014-15 season, he was awarded both the PFA Players' Player of the Year and the Premier League Player of the Season.

"In football you can always improve, you never reach your limit," Hazard said.

"There is always room to do better, both individually and collectively. I am in a good moment of my career, but this team can allow me to raise the bar even further."

Chelsea Eden Hazard Football
Get the latest Cricket news, check out the India cricket schedule, Cricket live score . Like us on Facebook or follow us on Twitter for more sports updates. You can also download the NDTV Cricket app for Android or iOS.