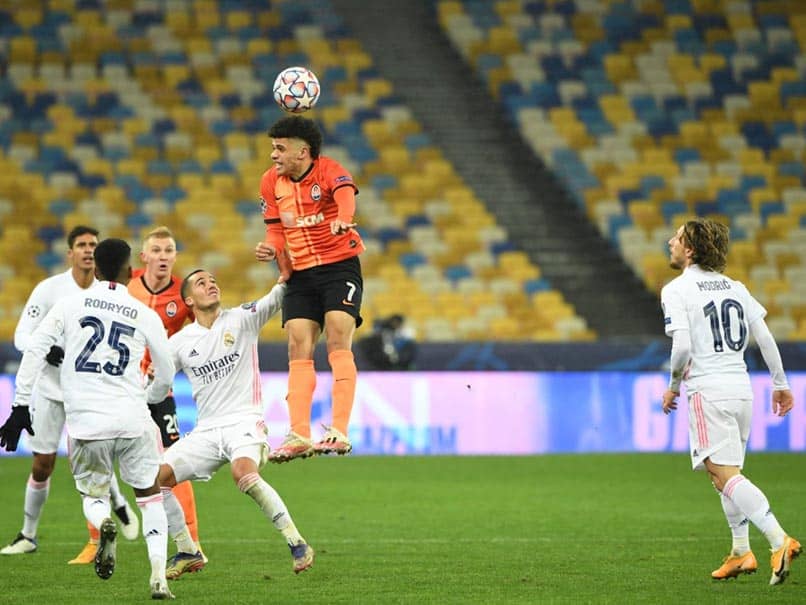 Zinedine Zidane rubbished suggestions he could walk away from Real Madrid and said the Spanish giants did not deserve to lose after going down 2-0 to Shakhtar Donetsk on Tuesday, their second defeat by the Ukrainians in this season's Champions League leaving their hopes of reaching the last 16 in the balance. Substitutes Dentinho and Manor Solomon both scored second-half goals in Kiev as Shakhtar stunned the 13-time European champions again, having already won 3-2 in Madrid in October.

Shakhtar had lost their last two Group B matches against Borussia Moenchengladbach by an aggregate score of 10-0, but this victory allowed them to move above Real into second place in the group with one game remaining.

Gladbach top the section by a point, while Shakhtar now have the upper hand on Real thanks to their superior head-to-head record.

However, Inter Milan's 3-2 win away to Gladbach not only kept the Italians alive, but also limited the damage for Real, who now know a win at home to the Germans next week will take them through, regardless of how Shakhtar fare in their last game.

Madrid have made it out of their group in every year since 1997 and so failure to qualify would be seen as a disaster, but Zidane said he would not leave the club he has so far led to three Champions League triumphs and two La Liga titles over two spells as coach.

"I am not going to resign, not at all," said Zidane. "We are always going to have difficult moments, and we are on a bad run, but we need to keep going."

"I have the strength needed to turn the situation around and I am going to give everything to do that, so are the players," added the Frenchman, whose team also lost at the weekend, going down 2-1 at home to Alaves in La Liga.

"We played well and we deserved more. We just need to lift our heads up and think about the next game."

Real were returning to the scene of their victory over Liverpool in the 2018 final, but they looked a shadow of their former selves in the cold and the snow in Kiev's Olympic Stadium, and the result further underlined how much they miss defensive talisman Sergio Ramos when he is not there.

This was Real's seventh defeat in the last nine Champions League matches they have played without Ramos, who is currently injured.

Perhaps this game would have turned out differently had Marco Asensio scored in the fifth minute rather than turn Karim Benzema's cross onto the post, but they went on to slump to a third defeat in their last five matches in all competitions.

Dentinho had replaced the injured Junior Moraes in the first half and the Brazilian got the opening goal just before the hour mark.

Ferland Mendy intercepted a Viktor Kovalenko ball into the box but only succeeded in laying it on a plate for Dentinho to tuck past Thibaut Courtois and in.

The Ukrainian champions then made sure of their victory on the counter-attack with eight minutes remaining as Israeli international Solomon picked up the ball on halfway and advanced unchallenged before picking his spot.

Sergio Ramos Football
Get the latest updates on India vs Australia Series, check out the India vs Australia Schedule for 2020-21 and Ind vs Aus live score . Like us on Facebook or follow us on Twitter for more sports updates. You can also download the NDTV Cricket app for Android or iOS.