UEFA president Aleksander Ceferin said that the 'Final Eight' format for the Champions League will not be repeated in future. 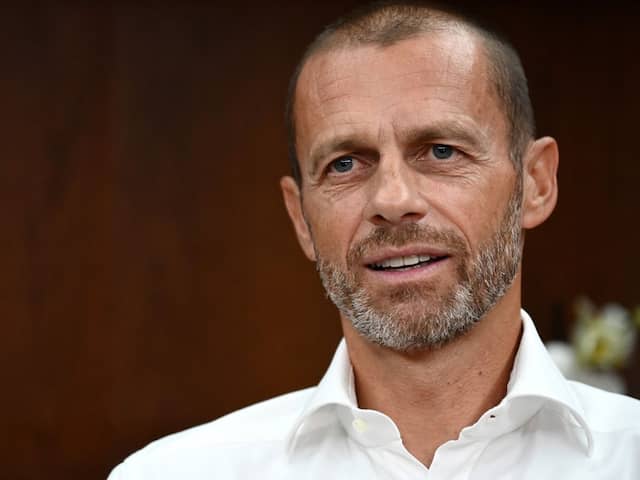 UEFA president Aleksander Ceferin is confident that things will get better into next year.© AFP

The 'Final Eight' format for the Champions League will not be repeated in future, UEFA president Aleksander Ceferin has told AFP, saying it is "impossible" to find space in an already packed calendar. "This tournament might be interesting in the future, but I don't think we can do it, because the calendar is so dense," Ceferin told AFP in an exclusive interview in Lisbon, where this season's Champions League is being played to a conclusion.

"I don't know where I can put a tournament for a week or two in May. I think it's impossible," he said.

Before the coronavirus pandemic, UEFA was busy contemplating changes to the format of the Champions League from 2024 onwards.

This year, all ties from the quarter-finals onwards are being played as one-off matches behind closed doors in the Portuguese capital as UEFA rushes to finish the competition after an enforced hiatus of five months because of the pandemic.

This season's final was supposed to be played in Istanbul at the end of May. Now it will go ahead in an empty Estadio da Luz on August 23, with the Turkish city having been awarded the hosting of next year's final instead.

But that is subject to the pandemic being under control by then.

"I am optimistic by nature, and I think that things will get better into next year and we will have normal football back, good old football with spectators, so we don't have a Plan B," Ceferin said.

"You have to know that until March we didn't have any plan, and then we had a Plan B, Plan C, Plan D, so we will adapt but I am sure the world cannot stop forever because of this virus," added Ceferin, the Slovenian who became president of European football's governing body in 2016.

"I expect a vaccine, as soon as possible I hope, so no, we don't have a plan to do the same competition next year."

Ceferin was speaking the day after Paris Saint-Germain beat Atalanta 2-1 in a dramatic first quarter-final of the competition.

The 'Final Eight' is taking place in strict conditions, including regular testing and the number of people entering stadiums kept to a minimum.

On Thursday, Atletico Madrid play RB Leipzig in the second quarter-final, with the Spaniards arriving in Portugal after a scare at the weekend when it was revealed two of their players had tested positive for COVID-19.

Ceferin said he was always confident the Champions League would be completed, along with the Europa League, which is being played to a finish in similar conditions in Germany.

"I was sure that we would do this. I had moments of nervousness but I never gave up on the project," he said.

"At the moment, now all the teams are in Portugal and in a bubble, I am much calmer. Because when they are at home, and they meet family and friends, it is always a risk."