Barcelona are second in the La Liga table, two points behind Real Madrid, following their 4-0 win over Sevilla at Camp Nou. 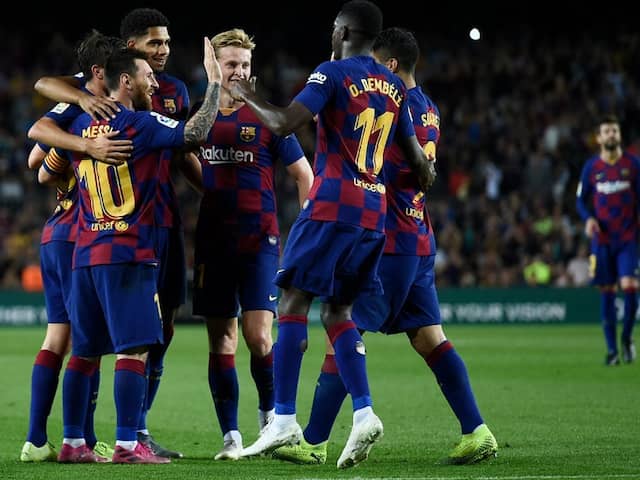 Barcelona vs Sevilla: Lionel Messi scored his 1st goal of the season by curling in a brilliant free-kick.© AFP

Barcelona are back in form and La Liga's big three are back at the top of the table after the defending champions put on a finishing masterclass to thrash Sevilla 4-0 on Sunday. Lionel Messi scored his first goal of the season by curling in a brilliant free-kick at Camp Nou after three goals in eight minutes from Luis Suarez, Arturo Vidal and Ousmane Dembele had already put Sevilla out of sight. "It was crucial for us," said coach Ernesto Valverde whose team ended the game with nine men. "It has been a strange start to the season and we have not added all the points we would have wanted."

Suarez launched the flurry, his stunning left-footed bicycle kick arguably even better than the volley he scored in the Champions League win over Inter Milan on Wednesday.

Vidal then finished a superb passing move that involved all 11 Barca players and Dembele powered through to make it three before Messi added a fourth in the second half.

The match descended into farce late on as Barcelona's debutant Ronald Araujo was sent off and Dembele followed after collecting a second yellow card for dissent.

The referee's report said Dembele was dismissed for calling Mateu Lahoz "very bad". He could now miss the Clasico on October 26.

"Dembele's is a mystery," said Valverde. "It is very difficult to get words out of him in Spanish, so what he said couldn't have been very long."

By then, the game was long gone as victory pushed Barcelona up to second in the table, two points behind Real Madrid and one above Atletico, who could have done with some of the Catalans' classy finishing in their goalless draw away at Real Valladolid.

For all the turbulence and scrutiny on Valverde and Zinedine Zidane, Barca and Madrid head into the international break not only as the league's two frontrunners but with confidence and momentum too.

Eden Hazard scored his first goal for Madrid in their 4-2 win over Granada on Saturday and Lionel Messi is off the mark as well after his own injury-interrupted start to the season.

This was Barcelona's fourth consecutive victory.

Messi's return has increased the pressure on Antoine Griezmann, who was left out of the starting line-up following his quiet display against Inter. Dembele was preferred on the left of the front three.

Sevilla, who drop to sixth, had eight shots to Barcelona's seven in the first half but were three down at the break.

Luuk de Jong is yet to score since his move from PSV Eindhoven last summer and the 29-year-old had four excellent chances to break his duck, three of them before Barca had taken the lead.

He fired Lucas Ocampos' pull-back straight at Marc-Andre ter Stegen, sidefooted wide and mistimed a header. In the second half, Arthur lost possession on the edge of his box but still De Jong could not capitalise, lashing his shot against the post.

In between, Barca had already made him pay. Suarez's effort was probably the pick of the trio in terms of difficulty, as he launched himself into the air, turned and threw his weaker left foot over the ball, and banged it into the net.

Five minutes later it was two, this one a team goal, quite literally, as all of Barca's players touched the ball in 85 seconds of build-up. Arthur's cross was the 25th pass, finding the sliding Vidal who was just onside.

The third three minutes later was about pace and power, and a mistake from Sevilla too, as Arthur robbed Fernando Reges. Dembele raced clear, fooled Diego Carlos with a dummy shot, before guiding the ball into the far corner.

After his fourth miss, De Jong was taken off and Messi went close after a barnstorming run. The only surprise was that he had not yet scored and he fixed that in the 78th minute after Sevilla gave him a third attempt at a free-kick. This time he did not miss.

The 20-year-old defender Araujo had come on for his debut in the 73rd minute and was sent off in the 87th for tugging down Javier Hernandez as Barcelona's last man. Dembele then saw red after picking up a second yellow card for dissent.

Atletico's stalemate means they have managed only two wins from their last seven games in all competitions and they could even have lost if Valladolid's Sandro Ramirez had not skied a first-half penalty. Diego Simeone's side managed only one shot on target.

Luis Suarez Arturo Vidal Ousmane Dembele Football
Get the latest Cricket news, check out the India cricket schedule, Cricket live score . Like us on Facebook or follow us on Twitter for more sports updates. You can also download the NDTV Cricket app for Android or iOS.