Premier League: Manchester City completed 18 successive victories in all competitions, thanks to Raheem Sterling's second-minute header at the Emirates Stadium. 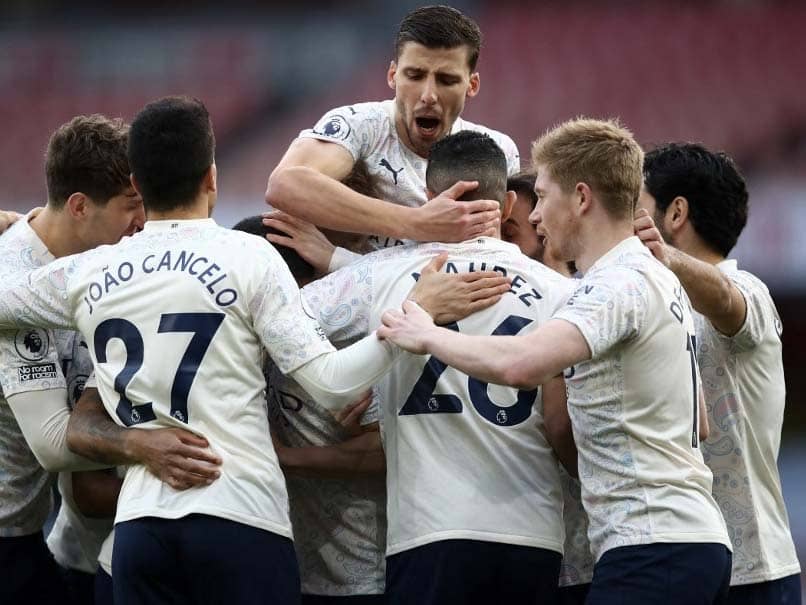 Manchester City are the first top-flight team to win their opening 11 league matches in a calendar year.© AFP

Manchester City moved a step closer to the Premier League title as Raheem Sterling's early goal gave the runaway leaders a 1-0 win against Arsenal on Sunday. Pep Guardiola's side made it 18 successive victories in all competitions, thanks to Sterling's second-minute header at the Emirates Stadium. With 13 games left, City are 10 points clear of second-placed Leicester City, who had closed the gap to seven with a 2-1 win at Aston Villa earlier on Sunday. City have equalled the club record of 11 successive away victories in all competitions, set from May to November 2017. They are the first top-flight team to win their opening 11 league matches in a calendar year.

Storming towards a third title in four seasons, City have won 13 consecutive league matches and are unbeaten in 25 games in all competitions, since a defeat at Tottenham in November.

Incredibly, that was the last time they trailed in any league fixture.

Guardiola's men weren't even at their best on their return to north London, but they still had enough in the locker to hand Arsenal a third defeat in their last four league games.

Borussia Monchengladbach have the next chance to stop City's incredible winning streak in the Champions League last-16 first leg on Wednesday.

If anyone would have the secret to stopping City's march to the title, it might have been Gunners boss Mikel Arteta.

The Spaniard served as Guardiola's assistant before taking charge of Arsenal last season.

But Arteta had to make changes as several of his players were fatigued after their midweek Europa League draw in Benfica.

City ruthlessly pounced on the uncertainty in Arsenal's reshuffled line-up as they took the lead after just 80 seconds.

Ruben Dias played a superb long pass to Riyad Mahrez and the Algeria winger lofted a cross into the six-yard box, where Sterling defied his diminutive stature as he rose above Rob Holding to head into the far corner.

Sterling's 13th club goal of the season was his sixth in his last nine appearances.

He should have had another moments later when Kevin De Bruyne's pass split the Arsenal defence, but this time Sterling delayed his shot and Bernd Leno was able to save at the forward's feet.

Mahrez tormented Arsenal left-back Kieran Tierney as he danced past him for a shot that deflected wide.

City's De Bruyne was making his first start for over a month after a hamstring injury.

The Belgium midfielder, who came off the bench in the win at Everton in midweek, tried to pick out Ilkay Gundogan but his errant pass betrayed a little rustiness.

City had monopolised possession but couldn't deliver the knockout blow.

They nearly conceded against the run of play when Tierney's volley forced a good save from Ederson.

By the time Arsenal winger Nicolas Pepe shot into the side-netting, Guardiola's frustrated voice could be heard exhorting his players to press harder.

City regained their momentum at the start of the second half and De Bruyne was just wide with an audacious chip from the edge of the area.

Leno had to save well from Gundogan's 20-yard drive before De Bruyne's volley whistled wide.

De Bruyne, not quite at his sharpest following the injury, was taken off after 63 minutes.

Joao Cancelo nearly gifted Arsenal an equaliser when his high backpass was volleyed straight to Mohamed Elneny by Ederson, but the midfielder blazed just wide.

Adding to Arsenal's problems, Holding was forced off with a potential concussion in the closing stages.

Manchester City Raheem Sterling Parker Kevin De Bruyne Football
Get the latest updates on India vs England Series, India vs England , live score and IPL 2021 Auction . Like us on Facebook or follow us on Twitter for more sports updates. You can also download the NDTV Cricket app for Android or iOS.