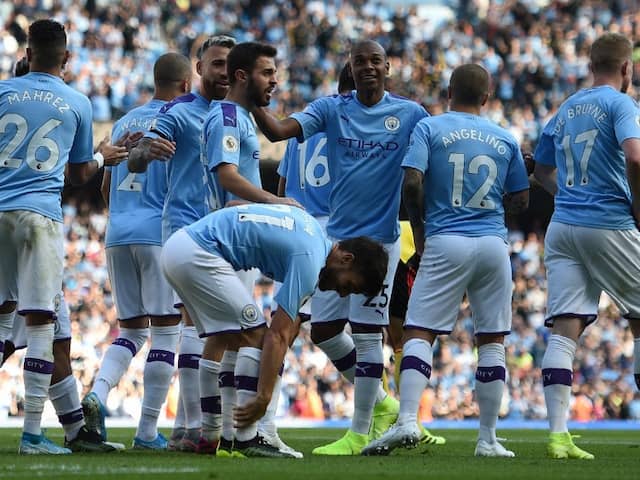 Bernardo Silva admitted Manchester City's "unbelievable" 8-0 thrashing of Watford was motivated by a desire to erase the bitter taste of their shock Premier League defeat against Norwich City. Man City recorded their biggest ever top-flight victory thanks to Bernardo Silva's hat-trick and goals for Sergio Aguero, David Silva, Nicolas Otamendi, Riyad Mahrez and Kevin De Bruyne in the Man City vs Watford match at a jubilant Etihad Stadium. It was the perfect response from Pep Guardiola's side after their shock 2-3 loss against Norwich last weekend.

That defeat has given the initiative to leaders Liverpool in the title race and Portugal playmaker Bernardo revealed City were desperate to make amends.

"We were unbelievable in the first 30 minutes, scored lots of goals and had control. After the Norwich defeat, it was great to give our fans the result and the performance," Bernardo said.

"We aimed to keep it going in the second half. We didn't want them to hurt us or score past us.

"Football is a hard game - I've won 8-0 today but I've lost plenty of times by five or four goals.

"It was a great performance, 8-0 says everything. It's very good to get the three points after defeat at Norwich and I'm very happy with my first hat-trick of my career. My first match ball at home."

Man City are now two points behind Liverpool, but Jurgen Klopp's side can reopen a five-point lead if they win at Chelsea on Sunday.

After winning the domestic treble last term, Bernardo believes the ruthless nature of Man City's win, which saw them keep their foot on the gas after scoring five goals in the first half, proves they still have the hunger for more silverware.

"All teams have good and bad moments, the way you react to the bad is the most important thing. Once again this team showed we want to fight for the Premier League and all the titles," he said.

Watford goalkeeper Ben Foster said City's superlative display was the best he had ever seen.

But he admitted the Hornets had failed to offer any kind of resistance in their heaviest ever defeat at any level of English football.

"It's probably a bit of shock, embarrassment. I think we let ourselves down today," Foster said.

"As a keeper coming to City and Liverpool, if you let five in 20 minutes you fear the worst, you think cricket scores.

"They are without doubt the best team I have ever played against. We were poor, didn't lay a glove on them but at times it was breathtaking watching them.

"You come away to City and I'm not joking, you think if you keep it to two or three - they are so good. Them and Liverpool are a different level."

Sergio Aguero Kevin De Bruyne English Premier League Football
Get the latest Cricket news, check out the India cricket schedule, Cricket live score . Like us on Facebook or follow us on Twitter for more sports updates. You can also download the NDTV Cricket app for Android or iOS.