Jose Mourinho became the target for memes after he was seen riding a cycle during Tottenham Hotspur's fitness building session. 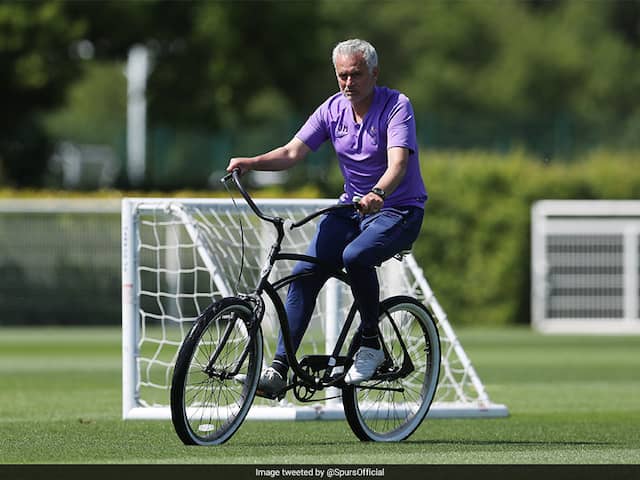 Picture of Jose Mourinho riding a cycle during Spurs training has left fans in split.© Twitter

As Premier League teams returned to training albeit in small groups, Tottenham Hotspur manager Jose Mourinho managed to provide some comic relief to football-starved Premier League fans. The likes of Harry Kane, Son Heung-min and Dele Alli among others were seen taking part in fitness building training sessions, with equipment being regularly disinfected. Keeping an eye on things was manager Jose Mourinho -- whilst riding a bicycle. The Spurs official Twitter handle posted an image of the Portuguese riding the cycle.

In response to the photo, fans flooded the comments section with some hilarious memes.

The Premier League's target of restarting on June 12 has been called into question by players' concern for their welfare, both from the threat of the virus and injuries with little preparation time after such a long layoff.

Meanwhile, Tottenham have launched another investigation into one of their players after defender Serge Aurier appeared to flout social-distancing rules for a third time.

The Ivorian posted an Instagram photo on Tuesday showing off his new haircut and tagged the barber in his post.

Hairdressers are closed in Britain in line with the government's rules on social distancing.

Spurs have previously had to remind Tanguy Ndombele, Davinson Sanchez, Ryan Sessegnon and Moussa Sissoko of their responsibilities after they were pictured in breach of social distancing guidelines.

Manager Jose Mourinho had also admitted his wrongdoing in arranging a one-on-one training session with Ndombele in April.

Son Heungmin Dele Alli Jose Mourinho English Premier League Football
Get the latest Cricket news, check out the India cricket schedule, Cricket live score . Like us on Facebook or follow us on Twitter for more sports updates. You can also download the NDTV Cricket app for Android or iOS.