Inside the Emirates Stadium: Arsenal F.C. vs Manchester United F.C.

The atmosphere inside the stadium Emirates Stadium during Arsenal F.C. vs Manchester United F.C. was intensifying. The feeling was surreal, to watch in flesh and blood, players who were heroes to millions. 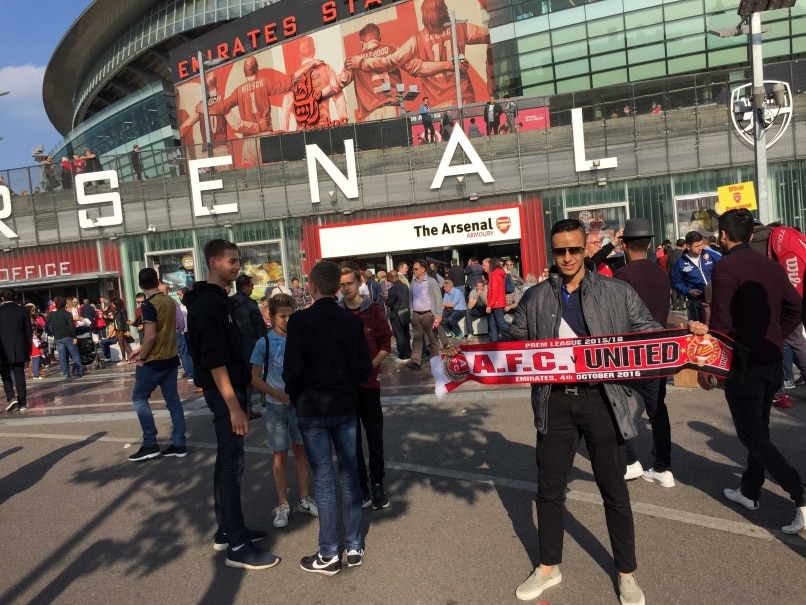 As I walked up to the Emirates, I was beaming; in a way only a fan going to his first game can. The excitement peaked as I entered the stadium and saw a familiar figure, a Belgian Behemoth with an unmistakable Afro, warming up on the pitch. This was followed by Wayne Rooney and Juan Mata going through shooting drills. The feeling was surreal, to watch in flesh and blood, players who were heroes to millions. As kick-off approached, the two teams walked to the middle of the pitch, to the sound of the Premier League anthem. The atmosphere inside the stadium was now intensifying. (Read Match Report)

A loud roar welcomed the referee's whistle and we were off. Arsenal didn't let United get anywhere near the ball in the opening exchanges. The Gunners attacked and completely dominated possession. There were shades of United's last league trip to the Emirates, where Arsenal had a similar start but had failed to capitalize. This time, however, they broke the deadlock in the sixth minute, as Sanchez got the ball past David de Gea at the near post. The stadium exploded into life, with resounding chants of 'And it's Arsenal' heard all around. Seated behind the goal, I had just finished watching the replay on the giant screen that my eye caught a marauding Walcott running at the United defense. He laid the ball off to Mesut Ozil and the German made it 2-0. The Arsenal fans were now jumping in their seats; their feelings of ecstasy were laced with a sense of bewilderment. Inside the opening seven minutes, they had blown Manchester United away. (Beating Man United Answers Critics, Says Arsene Wenger)

United's struggles continued. It almost seemed like they'd hit the pubs the previous night. Arsenal, on the other hand, were different class. The Gunners showed no signs of fatigue even though they had played in mid-week, in the Champions League. When Alexis hit the top corner in the 19th minute, any hopes of a miraculous comeback were put to bed. Not only because of the scoreline but equally so as United played with no penetration, while being instantly vulnerable on the counter. The United fans though, got behind their team and the loudest chants of '20 times Man United' were heard after Arsenal scored the third goal. Half time soon beckoned and Arsenal squandered a chance to turn this drubbing into an absolute rout, when Ramsey lifted the ball over.

With the game put to bed, the second half saw a much more relaxed atmosphere.

On the pitch, Arsenal were toying with Man United and off it, their fans loved every moment of it. Arsenal had given nothing away, with Petr Cech making a couple of great saves to ensure there would be no blemishes on this model performance. The United fans valiantly cheered every corner or free kick their team won, every chance they created or ball they closed down. They lived up to their reputation of being one of the league's best away fans. One heard 'Louis van Gaal's Red Army' time and again, even though their team had given them nothing to cheer about. Arsenal goalscorers Alexis Sanchez and Ozil were brought off to rapturous applause and the final twenty minutes saw Arsenal fans shout Ole each time a Gunner touched the ball.

The final whistle brought to an end a special Arsenal performance, which validated the title credentials of Arsene Wenger's team, and saw them leapfrog United into second place.

Comments
Topics mentioned in this article
Arsenal Manchester United English Premier League Football
Get the latest updates on India vs England Series, India vs England , live score and IPL 2021 Auction . Like us on Facebook or follow us on Twitter for more sports updates. You can also download the NDTV Cricket app for Android or iOS.