UK lawmaker Julian Knight said that some goal celebrations by Premier League footballers were "brainless" and gave out a poor message. 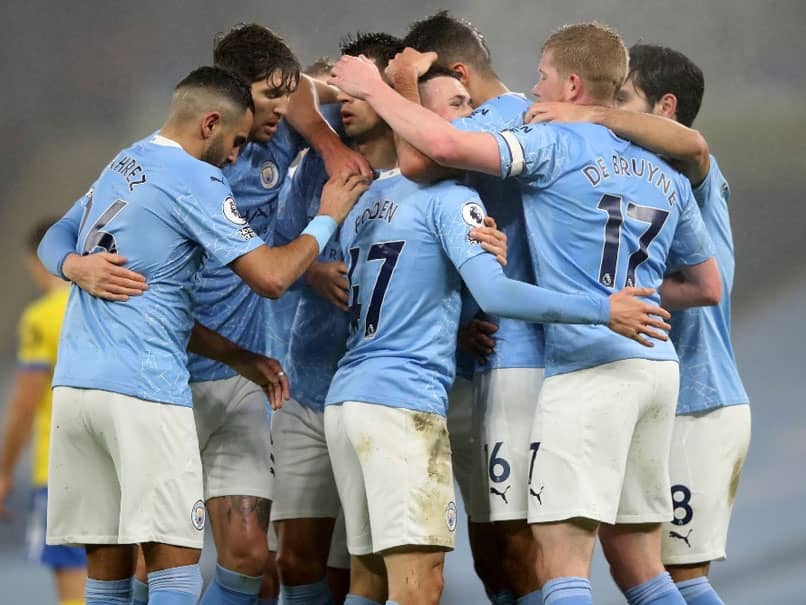 Manchester City players celebrated in a huddle after Phil Foden scored the winner against Brighton.© AFP

Footballers who continue to breach coronavirus protocols by hugging after goals have been labelled "brainless" by a senior British lawmaker. Manchester City and Fulham players crowded together after scoring on Wednesday, ignoring warnings from the Premier League to observe rules on unnecessary contact. Britain is struggling to contain a surge in Covid-19 cases. On Wednesday a new record number of deaths were registered -- 1,564 over 24 hours. City boss Pep Guardiola defended his players after their 1-0 win, which moved them to third in the Premier League.

"We are tested maybe five or six times in the last 10 days," he said at his post-match press conference. "Everyone is negative. In the real moment of joy, in the moment, to say the players don't hug and celebrate together, it is instinct and reaction. It is difficult."

"The moment you score a goal and one guy runs and the others don't go to celebrate with him, it is weird and uncomfortable."

But Julian Knight, the chairman of the House of Commons Digital, Culture, Media and Sport committee, strongly criticised the footballers.

"Some of the scenes we have seen have been brainless and give out an awful message," he told Britain's Press Association news agency.

Harry Kane celebrated his goal for Tottenham in Wednesday's 1-1 draw with Fulham in muted fashion, with fist bumps and high fives, but there was close hugging among the visitors when Ivan Cavaleiro equalised.

There were also joyous celebrations among the players when Manchester City's Phil Foden scored the only goal in their victory against Brighton.

Knight stopped short of calling for elite sport to be halted, as it was last year, saying the decision was "a matter for governing bodies and the health experts".

But he cast doubt on whether the existing plan for this year's delayed Euro 2020 could be carried out. The tournament is due to take place across 12 countries, with the semi-finals and final planned to take place at Wembley.