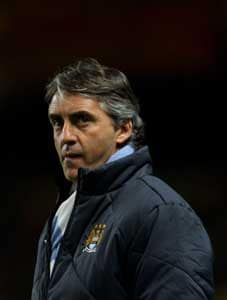 Nasri was a subdued figure as City moved into the last four thanks to substitute Sergio Aguero's late winner on Tuesday.

There were also reports of a clash between Nasri and former Arsenal team-mate Emmanuel Frimpong after the final whistle, although the home club have denied punches being thrown.

City manager Mancini admitted Nasri, who left Arsenal in an acrimonious move to City earlier in the season, was "nervous" during the game and has yet to play to his potential since arriving at the club.

The 24-year-old was also jeered by home fans angered by the manner of his departure in August. Mancini suggested it will be easier when he returns again in April.

"He can play better because he is a top player," Mancini said. "It was his first night he came back to Arsenal and it is not easy for a player that player here for four or five years, maybe he was nervous.

"I think that he can improve a lot but it was the same situation with players who arrived last year like Edin (Dzeko) and David (Silva) and he can get better because he is a top player.

"It is not important for him, it is important for the team. For him it is better that he played in this game so when he comes back to play here in the league he knows what will happen."

The tie was settled seven minute from full-time following a sweeping counter-attack, started by Edin Dzeko in his own penalty area and finished off by Aguero after a lay-off from Adam Johnson.

"It was a great goal, a great counter-attack," Mancini added. "I don't think that Arsenal had a lot of chances, I think we played well."

Mancini had changed his entire team aside from Nasri, who remained from the draw at Liverpool.

"We have a strong squad - all of the top teams have a good squad and can change eight, nine or 10 players," he added. "It is normal for the League Cup to change.

"We played 48 hours ago and Arsenal played Saturday so for us it was very difficult to play the same players."

"Chamberlain looked the whole night like he could deliver something special," Wenger said. "He has shown already he has moved forward considering where he was on the last two months. He has improved a lot already.

"The experience shows it is good sometimes to be positive, and as well patient.

"I was very patient with him until now. I feel it is important sometimes to hold them back a little and keep them on the training ground. He has shown he has improved a lot.

"You pushed him easily off the ball two months ago, but now you could see his resistance in the challenges, his strengths in the duels is there. That is very important."