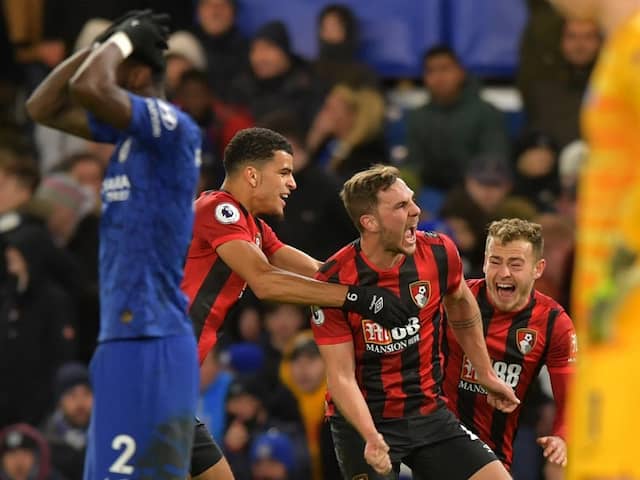 Chelsea remain in fourth place after losing to Bournemouth at home.© AFP

Chelsea slumped to a shock 1-0 defeat against struggling Bournemouth on Saturday as Dan Gosling's late goal extended the Blues' recent poor run in the Premier League. Frank Lampard's side have lost four of their last five league games following Gosling's clever strike six minutes from full-time at Stamford Bridge. Gosling's flick over his shoulder was initially ruled out for offside, but a lengthy VAR review eventually confirmed the midfielder was onside when he netted. After reaching the Champions League last 16 with Tuesday's win over Lille, Chelsea were hoping to bounce back from last weekend's surprise loss at Everton.

But this was another laboured display from Lampard's young team, who are out of sorts in a run that threatens to spoil the momentum from their fine start to the season.

Chelsea remain in fourth place but they will need to improve to hold onto that position with London derbies at Tottenham and Arsenal looming over the Christmas period.

The loss was especially galling because Chelsea were facing an injury-hit Bournemouth side who arrived on a run of five successive defeats and only one win in 10 games.

Bournemouth were missing eight players through injury but, after failing to record a shot on target in the defeat against Liverpool last weekend, they made life far more difficult for Chelsea.

Ryan Fraser wriggled past Antonio Rudiger on the right of the Chelsea area and drilled a low shot that Kepa Arrizabalaga saved at his near post.

Mason Mount was back in the Chelsea line-up in place of Mateo Kovacic and the young midfielder had a chance to open the scoring when Jorginho picked out his run into the Bournemouth area with a delicate pass.

Mount controlled well on his chest, but Aaron Ramsdale pushed away the shot.

That was part of an early Chelsea barrage in which Tammy Abraham guide a half-volley just wide from Cesar Azpilicueta's cross.

- Tangible reward -
Heading into this weekend, Chelsea had scored only 11 goals at Stamford Bridge this season as they struggled to find the cutting edge required to break down teams content to sit deep.

With Bournemouth following that strategy, Chelsea once again found it hard to turn territorial dominance into tangible reward.

Chelsea's fans were growing audibly frustrated until Bournemouth defender Jack Stacey came within inches of accidently easing the angst in the stands when he almost miscued a clearance into his own net.

It was a rare moment of menace for Chelsea. By the time Abraham headed over from Willian's corner just before the interval, Lampard was beginning to look vexed.

Lampard had admitted Chelsea needed to show more creativity in the final third on several occasions in recent weeks.

He responded by sending on Kovacic and Callum Hudson-Odoi soon after half-time, yet Chelsea looked increasingly ragged at the back and were nearly caught when Josh King found Gosling, who couldn't convert with the goal at his mercy.

Chelsea finally worked a sight of goal but left-back Emerson squandered a golden opportunity, heading straight at Ramsdale from point-blank range after Azpilicueta's header looped into his path.

It was the crucial moment as Bournemouth made the most of their luck to snatch the points in the 84th minute.

Azpilicueta's clearance was headed back into the Chelsea area by Jefferson Lerma and the unmarked Gosling hooked the ball over his shoulder and past Kepa despite Azpilicueta's attempt to clear off the line.

Initially, the goal was disallowed for offside against Gosling, but the review showed the midfielder was onside, allowing Bournemouth to celebrate wildly as Chelsea stood shell-shocked.

Kovacic tried to rescue a point in stoppage-time, but his blast was repelled by Ramsdale.

Bournemouth English Premier League Football
Get the latest Cricket news, check out the India cricket schedule, Cricket live score . Like us on Facebook or follow us on Twitter for more sports updates. You can also download the NDTV Cricket app for Android or iOS.