Behind Enemy Lines: A Man United Fan in Liverpool

In English football's biggest game, the Red Devils pulled off a classic smash and grab at Anfield on Sunday. The home or 'Kop' end at Anfield, where Liverpool faced Man United on Sunday© NDTV

As I exited Liverpool Lime Street Station on a chilly afternoon, I felt like a soldier, trespassing enemy territory, to support the troops. Before the game, I entered a local pub where I was welcomed by hostile gazes all around. It didn't take long to realize that wearing my green and gold Man United scarf was not a smart idea. I walked out and took it off, before tucking it into my jacket.

On making my way to the stadium in a taxi, the driver and I engaged in small talk about the game. On sharing my uncomfortable experience at the pub with him, he proceeded to tell me calmly, "Keep it on and they will hit you." The scary part, however, was not the possible assault and battering one could be handed because of a scarf, but how routine the driver's admission made it seem.

On reaching Anfield, I saw thousands, all clad in the Liverpool red. There wasn't a single Man United fan that made his allegiance obvious. It was only on entering the stadium and reaching the away fans' section that one could see scarves, jerseys and beanies with the iconic Red Devil crest.

All away fans were handed a letter before they made their way to the seats. It was from manager Louis van Gaal, thanking the fans for their support and requesting them to remain seated during the game. As I found out eventually, the request was not to be entertained.

While there were long queues outside the snack bar, one noticed the lack of diversity among the fans.

The crowd at Old Trafford tend to be very multi-cultural but the travelling United fans on Sunday were almost entirely British. This did not, however, stop the displays of solidarity before kick-off, as fist-bumps and high-fives were rampant, while Man United chants rang around the space.

As I made my way to my seat, I saw the Man United players warming up about 20 feet away from me. Never before had I seen these superstars from such close quarters. Not one of them sported a smile. Stern, focused and almost stony-faced, the players were put through their paces by the coaching staff.

Approaching kick-off, the Liverpool Kop belted out their legendary rendition of "You'll never walk alone", as the sense of occasion took over. 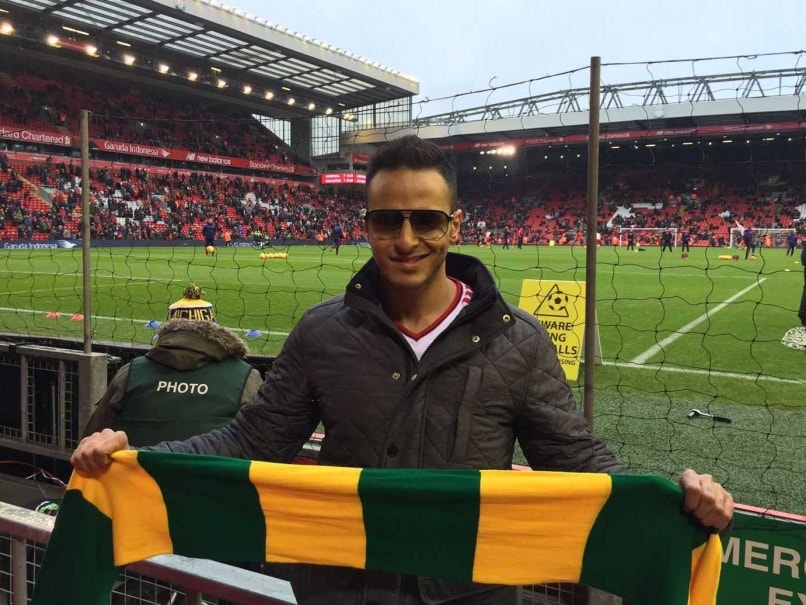 The author inside Anfield stadium, holding his green and gold Manchester United scarf.

During the first half, the United fans were fairly quiet. Only David de Gea gave them reason to applaud, saving Adam Lallana's header, as Liverpool dominated proceedings. Both Milner and Henderson had efforts, which could fairly be described as speculative. It seemed as though nerves affected both sides - Liverpool in their finishing and United in defence.(Manchester United F.C. Down Liverpool F.C. as Wayne Rooney Grabs Winner)

Man United came out in the second half with a renewed sense of intent. They were more confident in possession and created chances. The away fans grew louder and louder as the game progressed, taunting the Kop with chants of "Where's your famous atmosphere?"

In the 70th minute, despite having three Liverpool players mark him, Marouane Fellaini managed to head a Juan Mata cross onto the crossbar. The rebound was smashed into the roof of the net by the only Scouser on the pitch, United captain Wayne Rooney.

A 3000-strong roar and scenes of absolute euphoria followed. The United fans, who hadn't sat in their seats for a second, were now screaming, dancing and embracing one another. It was like a release, with all the pent-up frustration let out in an instant. The goal meant so much. The Liverpool-born Rooney had returned to Anfield and scored a winner against the Scousers after 11 years.

The last 15 minutes encompassed a few nervy moments but the goal had dented the morale of Liverpool players considerably. As full-time beckoned, there was a sense of inevitability that United would hang on, and Louis van Gaal would make it four-in-four against Liverpool.

Mark Clattenburg soon blew the whistle and United fans knew ecstasy. They had got one over Liverpool, behind enemy lines and moved six-points clear of their biggest rivals.

The Liverpool fans exited the stadium, with a sense of bewilderment. While the United fans, who were still singing and chanting, were held back in the stadium for about 20 minutes, to prevent violence on the streets.

On exiting the stadium, among a flurry of police, armed guards and stewards, I wore a smile as wide as the Manchester Ship Canal, knowing well that I had witnessed a moment that could perhaps be crucial to the United manager's future and one that I would savour for years to come.Disclaimer: The opinions expressed within this article are the personal opinions of the author. NDTV is not responsible for the accuracy, completeness, suitability, or validity of any information on this article. All information is provided on an as-is basis. The information, facts or opinions appearing in the article do not reflect the views of NDTV and NDTV does not assume any responsibility or liability for the same.

Comments
Topics mentioned in this article
Manchester United Liverpool English Premier League Football
Get the latest updates on India vs England Series, India vs England , live score and IPL 2021 Auction . Like us on Facebook or follow us on Twitter for more sports updates. You can also download the NDTV Cricket app for Android or iOS.