Manchester City thrashed Aston Villa 6-1 to move ahead of Leicester into second on the Premier League points table. 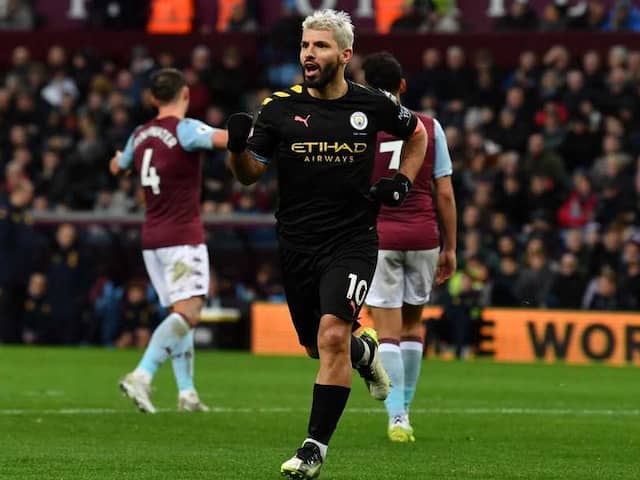 Sergio Aguero became the Premier League's top scoring foreign player with a hat-trick as Manchester City thrashed Aston Villa 6-1 to move ahead of Leicester into second in the table. It may be too late to salvage City's defence of the Premier League title as they remain 14 points behind runaway leaders Liverpool, who also have a game in hand, but led by Aguero the champions showed they will not give up the chase. An injury-hit Villa were blown away by three goals in 10 first-half minutes as Riyad Mahrez struck twice before Aguero's blast into the top corner from long range.

Gabriel Jesus added a fourth before half-time and Aguero added two more in the second half to surpass Thierry Henry as the top scoring overseas player in Premier League history with 177 goals.

City boss Pep Guardiola could afford the luxury of recalling Jesus and Aguero among six changes to the side that also outclassed Manchester United in midweek to put one foot in the final of the League Cup.

Villa could be their opponents at Wembley on March 1 as they held Leicester 1-1 in the first leg of their semi-final on Wednesday, but on this evidence they would be powerless to stop City lifting the trophy for a third straight season.

In stark contrast to the attacking options available to Guardiola, Dean Smith did not have a fit striker to choose from with Wesley ruled out for the remainder of the season, so midfielders Anwar El Ghazi and Jack Grealish were forced to deputise as front men.

Villa have also been hit by injuries at the other end of the field with goalkeeper Tom Heaton also out for the rest of the campaign.

Former Spanish international Pepe Reina was in the stands ahead of his loan move from AC Milan being completed and Orjan Nyland did little to further his case of keeping his place ahead of the ex-Liverpool stopper.

Mahrez on the mark

Nyland was beaten at his near post as Mahrez was allowed to cut onto his favoured left foot to open the floodgates on 18 minutes.

The Algerian's old Leicester teammate Danny Drinkwater was making his Villa debut after troubled spells at Chelsea and Burnley since leaving the Foxes.

Drinkwater was playing against City for the third time in his last three Premier League appearances with three different clubs.

His lack of match practice was exposed for City's second as Drinkwater was caught in possession inside his own box by Jesus and the ball broke kindly for Mahrez to drill home his ninth goal of the season.

Aguero then thumped home a third, although Nyland could have got a stronger hand to the Argentine's effort.

All that was missing from a complete City performance was a moment of inspiration from Kevin De Bruyne and the Belgian duly delivered with a wonderful curling cross to set the fourth on a plate for Jesus in first-half stoppage time.

City did not let up after the break and could have made it many more than six as David Silva picked out Aguero to calmly slot home his record-breaking goal.

The Argentine's 12th Premier League hat-trick arrived eight minutes from time as he demonstrated his array of finishes by this time blasting his past the helpless Nyland.

El Ghazi scored from the penalty spot in stoppage time, but it was little consolation for Villa, who dropped into the relegation zone after Watford's win at Bournemouth earlier in the day.

Sergio Aguero English Premier League Football
Get the latest Cricket news, check out the India cricket schedule, Cricket live score . Like us on Facebook or follow us on Twitter for more sports updates. You can also download the NDTV Cricket app for Android or iOS.