Yusuf Pathan exchanged sweets with CISF personnel at the airport on the occasion of Diwali. 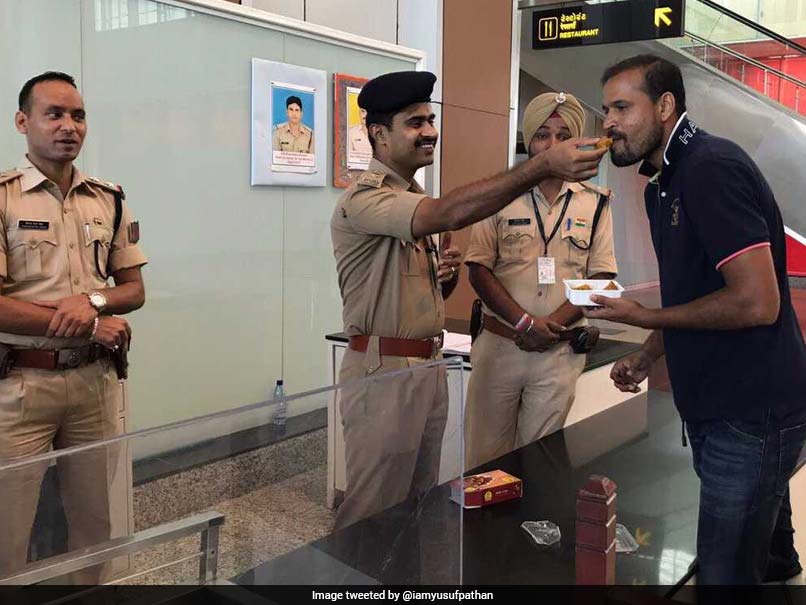 Baroda cricketer Yusuf Pathan's gesture on Wednesday of exchanging sweets with CISF security personnel at the airport was hailed by Twitterati. The all-rounder was greeted after he posted pictures on social media for his heartwarming gesture. In the pictures, Yusuf is seen spending time with the jawans. "Salute to the #jawans who are working even on the festival day. We exchanged sweets at the Baroda airport on the occasion of Diwali. #HappyDiwali," he wrote. While some users wished him a very Happy Diwali in response, few extended their respect for his gesture and praised him for setting an example. Yusuf's team Baroda will next play Tripurafrom November 1 in a crucial Group C encounter at Vadodara.

Salute to the #jawans who are working even on the festival day. We exchanged sweets at the Baroda airport on the occasion of Diwali. #HappyDiwali pic.twitter.com/mtkdsEfNpA

You're doing a great job.

Kudos ?? ?? to Yusuf Bhai for taking special care about #jawans !!

Great respect for you. Our jawans are all time real hero..??

The 34-year-old Yusuf is currently playing Ranji Trophy for his state team under the captaincy of his brother Irfan Pathan. Yusuf, who last played for India in 2012, started the current season with twins tons against Madhya Pradesh.

Irfan even uploaded a video that showed his brother Yusuf reaching the landmark with a big hit that was followed by an animated celebration where Irfan was seen leaving his bat at the non-striker's end, slowly walking down to Yusuf and then giving him a tight hug.

Comments
Topics mentioned in this article
Yusuf Pathan Irfan Pathan Cricket
Get the latest updates on Olympics 2020, Olympics 2020 Medal Tally, Live Cricket Score . Like us on Facebook or follow us on Twitter for more sports updates. You can also download the NDTV Cricket app for Android or iOS.