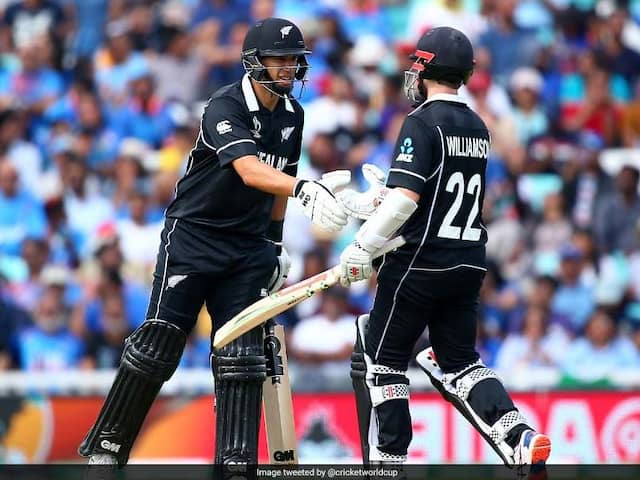 New Zealand beat India by six wickets in the first warm-up match before World Cup 2019. Chasing a modest total of 180, New Zealand opener Colin Munro fell cheaply to Jasprit Bumrah's perfect yorker in the second over. Martin Guptill (22 off 28) and skipper Kane Williamson (67 off 87) batted together till the 10th over, adding 29 runs. KL Rahul took a blinder, running backwards, to dismiss Martin Guptill. After that, Ross Taylor and Williamson together added 114 runs between them. However, both the batsmen got out towards the fag end of their innings but by then New Zealand's victory was a done deal. Earlier, India skipper Virat Kohli won the toss and chose to bat on a green track. Kedhar Jadhav and Vijay Shankar were not part of India's playing line up. India didn't have the greatest of starts as vice-captain Rohit Sharma and his partner Shikhar Dhawan both fell to Trent Boult after scoring two runs each inside four overs. In at three, KL Rahul also couldn't last long and went back to pavillion after dismantling his own stumps. Skipper Virat Kohli and Hardik Pandya, who came ahead of MS Dhoni to bat No. 5, built a small partnership but Kohli was undone by Colin de Grandhomme in the 11 over, with scoreboard reading 39/4. Hardik (30 off 37) and Dhoni (17 off 42) kept Indian innings going for a while but New Zealand bowlers picked three quick wickets of Hardik Pandya, Dinesh Karthik and MS Dhoni to put India completely on the backfoot. But Ravindra Jadeja (54 off 50) batted with the tail to help India post 179 runs. He was helped by Kuldeep Yadav who scored 19 off 36 balls. (SCORECARD)

New Zealand Cricket Team World Cup 2019 Cricket Live Score Live Cricket Score Live Blogs
Get the latest Cricket news, check out the India cricket schedule, Cricket live score . Like us on Facebook or follow us on Twitter for more sports updates. You can also download the NDTV Cricket app for Android or iOS.