Shaun Pollock wowed fans on Twitter by pulling off an unreal trick shot that even Kevin Pietersen applauded. 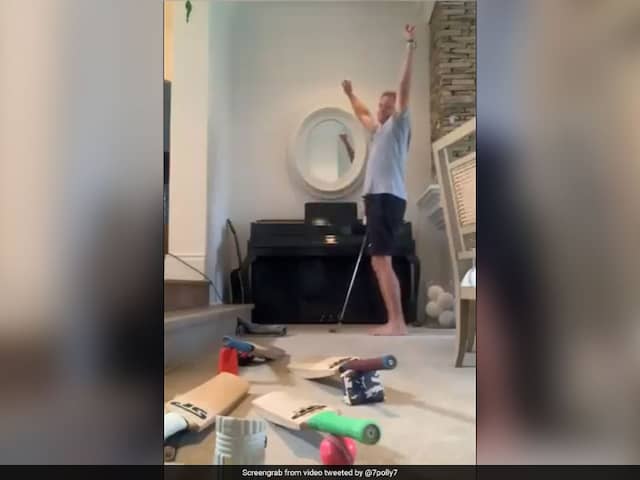 Professional cricketers have unmatched skills with the bat in hand and it looks as if they are not too shabby when they substitute the willow for a golf club. At a time when little or no sporting events are taking place due to the coronavirus pandemic, a race seems to be on between cricketers, past and present, as to who can come up with a better golf trick shot. At least for the time being, former South Africa captain Shaun Pollock seems to have taken the lead in that race.

Scotland's wicketkeeper-batsman Matthew Cross has been pulling off some brilliant golf trick shots. Having executed an unreal trick shot, earlier this month, that not only showcased his talents with the golf club in hand but also his footy skills, the 27-year-old came up with yet another trick shot bouncing the ball off three bats and into an empty can.

The International Cricket Council (ICC) too saluted the Scotsman by posting a video of his brilliant shot.

How many runs does that count as?pic.twitter.com/zUWVbpLD05

However, along came 'Polly' (Shaun Pollock) to steal Matthew Cross' thunder by going one better.

Take a look for yourself to see which of the two is the better one.

Looks like @7polly7 has taken a lead here, @crossy16pic.twitter.com/WK1SrX9TZh

The cricketing calendar has been thrown into chaos due to the ongoing coronavirus crisis. All major international cricket series cancelled while the start of lucrative Indian Premier League, originally scheduled for March 29, was delayed until at least April 15.

A swathe of qualifiers due to take place before July for the T20 World Cup and the 2023 50-over World Cup have also been postponed.