Virat Kohli will lead India in the upcoming three-match T20I series against the West Indies. 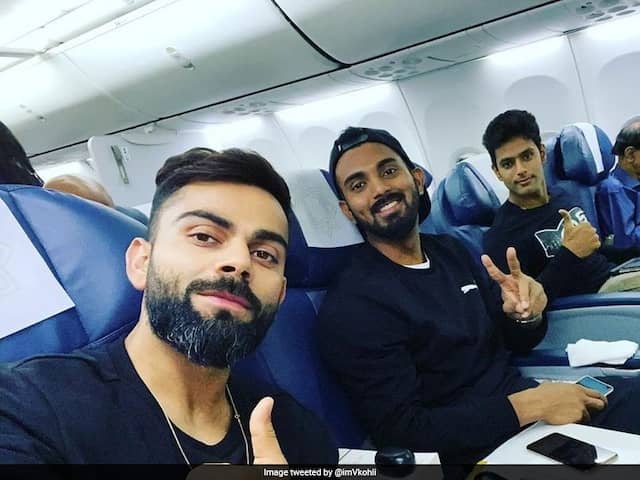 Virat Kohli took to Twitter to share a picture with batsman KL Rahul and all-rounder Shivam Dube ahead of the upcoming three-match Twenty20 International (T20I) series against the West Indies on Tuesday. "Hyderabad bound @klrahul11 @IamShivamDube," Virat Kohli captioned the flight selfie. The first T20I, which was scheduled to take place in Mumbai, was shifted to Hyderabad. The T20I series kicks off on December 6 in Hyderabad while Thiruvananthapuram will host the second T20I. The final game of the series will be played in Mumbai on December 11. The T20I series will be followed by a three-match One-Day International series.

The Board of Control for Cricket in India (BCCI) announced 15-member squads for T20I and ODIs on November 21.

Virat Kohli returned to India's T20I squad after being rested for the series against Bangladesh. Bhuvneshwar Kumar, Kuldeep Yadav and Mohammed Shami were also included in the squad for the T20I series.

India's opening batsman Shikhar Dhawan suffered a knee injury during a Syed Mushtaq Ali trophy game and was ruled out of the T20I series.

The BCCI named Sanju Samson as Dhawan's replacement for the upcoming series.

For the West Indies, Kieron Pollard will lead the side in the T20I as well as the ODI series against India.

The visitors recently lost a three-match T20I series to Afghanistan in India.