Virat Kohli and Steve Smith have been a constant target of comparison by the experts, fans and the media alike and Michael Vaughan has now chipped in. 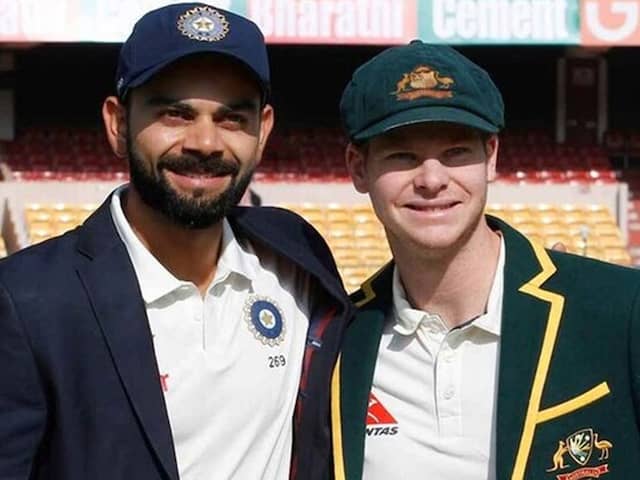 Virat Kohli and Steve Smith top-scored for their sides in the just-concluded ODI series.© AFP

Virat Kohli won yet another player of the series trophy as India beat Australia to clinch the three-match One-day International (ODI) series 2-1. After India had lost the first ODI by 10 wickets, Kohli led from front in last two ODIs, helping India seal the series coming from behind. Virat Kohli and Steve Smith were two of the most successful batsmen in the series. Their performances once again left the fans as well as experts divided in their opinions as to who is the best players across formats. Former England skipper Michael Vaughan was mighty impressed by Kohli's performance and termed him as the "best all-round" batsman across formats. Vaughan's comments came in reply to a Twitter post which had termed Steve Smith as the "finest all format batsman".

Replying to the post, Vaughan tweeted, "Disagree ... Virat is the best all round... !!"

Both Kohli and Smith were the main-stays for their respective sides in the just-concluded ODI series. Smith scored the maximum number of runs in the series and behind him was the Indian skipper Virat Kohli.

After missing a century in the second ODI, Smith finally breached the three-figure mark as he scored 131 runs in the third match -- his first ODI century in three years.

Kohli, however, failed to score a century in the series but anchored the Indian innings in the middle overs, which contributed to India's victories in last two ODIs.

Smith's both the knocks in the series couldn't help his side win any of the matches, while Kohli's both half-centuries led India to a comfortable victory.

As far as the rankings is concerned, Kohli is on top of ODI and Test ranking charts and occupies the 9th spot in the T20I ranking -- which speaks volumes of his prolific run-scoring abilities across formats.

Smith, on the other hand, is on the second spot in the Test ranking while misses the Top-10 spots in both ODI as well as T20I rankings.

Virat Kohli Michael Vaughan Cricket
Get the latest updates on IPL 2020, check out the IPL Schedule for 2020 and Indian Premier League (IPL) Cricket live score . Like us on Facebook or follow us on Twitter for more sports updates. You can also download the NDTV Cricket app for Android or iOS.