Virat Kohli smashed six fours and as many sixes to record his career-best T20I score of 94 not out. 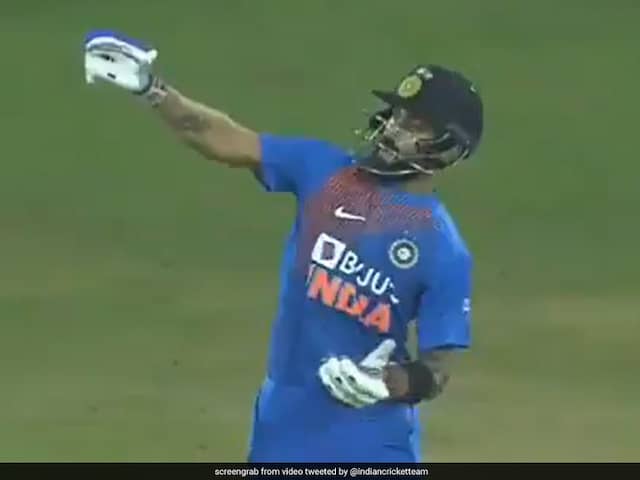 Virat Kohli brought out his aggressive side during the 1st T20I against the West Indies.© Screengrab of video shared by @indiancricketteam

Virat Kohli hit an unbeaten 94 off 50 balls as India beat the West Indies by six wickets in the first Twenty20 International (T20I) in Hyderabad on Friday. After a rather sedate start in the mammoth chase, Virat Kohli was fired up after Kesrick Williams almost collided with him mid-pitch in the 13th over. Then, the Indian skipper hit Jason Holder for a maximum to reach his 23rd T20I fifty in the 15th over of the chase. Kohli was on a rampage in the 16th over bowled by Williams that went for 23 runs. Kohli even imitated Kesrick Williams's "notebook" celebration after hitting him for a six.

You do not mess with the Skip! #TeamIndia #INDvWI @paytm

Kohli smashed six fours and six sixes to record his career-best T20I score, beating his previous high of 90 with a winning hit over the rope.

Virat Kohli Kesrick Williams Cricket India vs West Indies 2019/20 India vs West Indies, 1st T20I
Get the latest Cricket news, check out the India cricket schedule, Cricket live score . Like us on Facebook or follow us on Twitter for more sports updates. You can also download the NDTV Cricket app for Android or iOS.