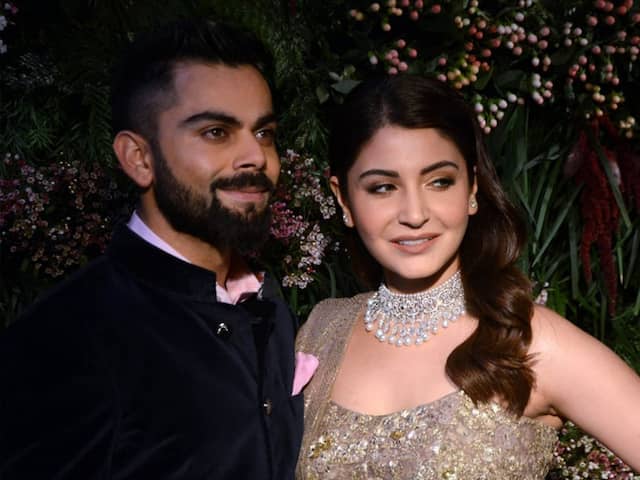 Virat Kohli and Anushka Sharma had tied the knot on December 11, 2017 in Tuscany, Italy.© AFP

Virat Kohli, the Indian captain, dismantled the West Indies bowling attack en route his unbeaten knock of 70 off 29 balls during the third and final Twenty20 International (T20I) in Mumbai on Wednesday. Virat Kohli's knock that came at a strike rate of 241.38, laced with four fours and seven sixes, helped India post an imposing total of 240/3 in their quota of 20 overs. In response, the hosts restricted the West Indies to 173/8 in their chase of 241 with skipper Kieron Pollard hitting a valiant 68 off 39 balls. With the 67-run win, India also clinched the three-match series 2-1. Interestingly, Virat Kohli, who is married to Bollywood actress Anushka Sharma, "gifted" his exhilarating knock to his wife on their second wedding anniversary.

"It was a pretty special innings and also being our second wedding anniversary, it was a special gift," Virat Kohli said at the post-match conference.

"It was a special night and one of the best innings I have played," Kohli added.

Virat Kohli and Anushka Sharma had tied the knot on December 11, 2017 in Tuscany, Italy.

Earlier in the day both Virat Kohli and Anushka Sharma had posted adorable anniversary wishes for each other on their respective social media handles.

In reality there is only love and nothing else. And when god blesses you with the person who makes you realise that everyday, you have just one feeling, gratitude pic.twitter.com/uVnCA66xa4

Coming back to cricket, India beat West Indies by 67 runs in the third and final T20I in Mumbai on Wednesday to clinch the series 2-1.

Virat Kohli, who recorded his career-best score of 94 not out in Hyderabad before scoring a match-winning 70 not out in Mumbai, was adjudged the man of the series.

Virat Kohli India vs West Indies 2019/20 Cricket India vs West Indies, 3rd T20I
Get the latest Cricket news, check out the India cricket schedule, Cricket live score . Like us on Facebook or follow us on Twitter for more sports updates. You can also download the NDTV Cricket app for Android or iOS.