Vijay Shankar has been out of the Indian team scheme of things since he got injured during a World Cup match and is now trying to change his shape and luck. Vijay Shankar shared a body transformation picture on social media but it failed to impress some users, who decided to troll the Indian all-rounder. "The sweat, the time, the devotion. It pays off! #TransformationTuesday," Vijay Shankar captioned the photo on Twitter and Instagram on Tuesday. The 28-year-old fast-bowling all-rounder last played for India on June 27 in a World Cup match against the West Indies. Vijay Shankar was ruled out of the World Cup due to a toe injury and couldn't make a comeback to the Indian team after that.

The sweat, the time, the devotion.
It pays off! #TransformationTuesday pic.twitter.com/oSyNWvMmVJ 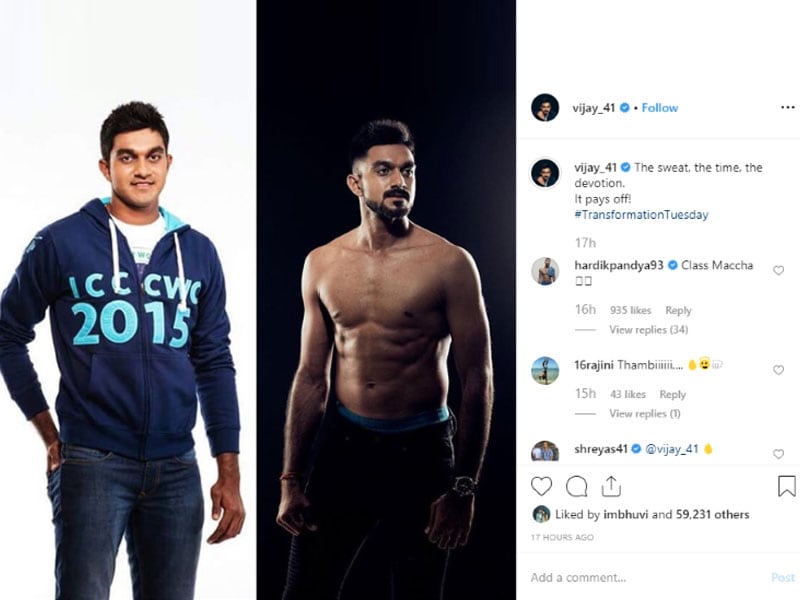 However, Shankar's shirtless picture didn't go well among some Twitter users, who trolled him for not focusing on cricket as much as his body.

So much efforts for removing the zipper?

Facial hair and clothing off are the only two differences one can make. You may have had a 6pack under that sweatshirt who knows ?

Good tranfromation ji... But u lost u r place in Indian team.... Work hard and come back

Shankar was forced to leave the World Cup campaign midway when he sustained a toe injury due to a yorker bowled by Jasprit Bumrah in the nets.

Ambati Rayudu, who was overlooked for the number one spot because of Shankar, had taken a dig at MSK Prasad's statement with a cheeky social media post.

"Just Ordered a new set of 3d glasses to watch the world cup," he had tweeted at the time.

Shankar recently made a comeback in the Tamil Nadu Premier League (TNPL) and was included in India A squad for a series against South Africa A. However, he was soon ruled out of the series with a thumb injury.